1352 Lofts Condominiums were built in 2007 on a former parking lot on South Street, just east of Broad Street. 1352 Lofts is a unique building, being the only ground up loft building built in Philadelphia in recent years. With large picture windows, they have dramatic panoramic views of the Center City skyline, South Philadelphia, and the Avenue of the Arts and had sold well, despite the oncoming national recession after 2007. Now, resales at 1352 Lofts are also very strong, having begun recently in 2014, and the building is generating a good buzz.

1352 Lofts has a 24/7 concierge, deeded parking, and is pet-friendly. The condo units have 20 foot ceilings, European-style kitchens, and floor to ceiling windows. Units generally are 2,300 square feet, with 500 square foot balconies. The penthouse units are coming soon. All this with a low condo fee.

The building is at the intersection of two of Philadelphia’s most interesting and colorful streets. South Broad Street is called the Avenue of the Arts for a good reason. Within a few blocks north of 1352 Lofts is the Academy of Music, where the Pennsylvania Ballet and Opera Company of Philadelphia reside, and the Kimmel Center , where the Philadelphia Orchestra and Philadelphia Chamber Music Society reside, as well as the Merriam, Wilma, and Suzanne Roberts Theatres. The Philadelphia Arts
Bank is a couple doors down at the corner of Broad and South. South Street has some of the city’s trendiest stores and restaurants and has seen much development since 2007. Also, Rittenhouse shopping and dining is a few blocks away and Washington Square West and Antique and Jeweler’s Rows are to the north. 1352 Lofts is within walking distance to many of Center City’s largest office towers.

You can find out more by going to www.1352south.com. 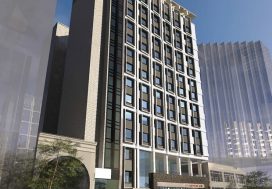