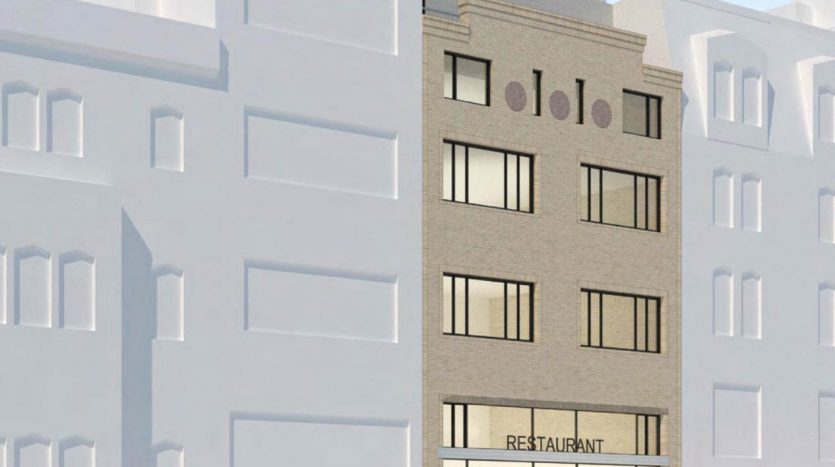 Rittenhouse Square is Philadelphia’s wealthiest and most luxurious neighborhood.  The heart of the neighborhood’s famous upscale shopping district is on Walnut Street, also known as Rittenhouse Row.  While most of the attention and luxury of Rittenhouse Row surrounds Rittenhouse Square Park and the blocks east of the park to Broad Street, the western end of Walnut Street to the Schuylkill River has lagged in development and luxury.  Developers now are starting to notice the part of Walnut just east of the Schuylkill and are starting to buy properties there for development. One such property is at 2204 Walnut Street. This property was originally built in 1872 as a private home for the Ashhurst family.  Later a fourth floor was added. After a while, it became the Holman School for Girls, and then in 1938 it was converted into an office building and showroom for an anthracite coal trade group. The original Victorian Gothic facade was replaced that year with an art deco facade, which consisted of white brick and metal windows, with three ceramic rondelles near the top.  AMZ Four LLC is now renovating the building into apartments and retail.The renovation is being designed by Stuart Rosenberg Architects.

The renovation will add a seven story addition in the back and three stories over the existing building.  The top floors will be setback from the front and back facades. The front facade will be restored with aluminum windows and large retail windows.  The first floor retail space, which most recently was a West Coast video store, will be renovated. The developers are hoping to fill that retail space with a restaurant.  The front doors to the restaurant will have art deco doors with large half circle windows like the original doors of the 1938 renovation. Above and behind the retail space will be 24 rental units, with two studios in the first floor rear, thirteen one-bedroom units, and nine two-bedroom units.  A lightwell will bring in light into the middle of the building. The renovated building will have roof decks and terraces in front of the setback portions. The side walls will be brick or stucco.

The section of Rittenhouse Square near the Schuylkill River is experiencing other new developments, including 2216 Chestnut Street; a large apartment tower, One Riverside Condominiums, and the new headquarters for Aramark in the former Marketplace Design Center building.  The creation of the Schuylkill River trail and the Penn Park along each side of the river has increased the desirability of waterfront living in Rittenhouse. Soon, The Laurel on Rittenhouse Square Park will begin construction and The Harper on Chestnut Street next door will complete construction.  On the 2100 block of Walnut Street, three upscale residential projects have recently been built. 2204 Walnut Street is another step in the revitalization of this part of Rittenhouse and Walnut Street.

The data relating to real estate for sale on this website appears in part through the BRIGHT Internet Data Exchange program, a voluntary cooperative exchange of property listing data between licensed real estate brokerage firms in which The Condo Shop participates, and is provided by BRIGHT through a licensing agreement. The information provided by this website is for the personal, non-commercial use of consumers and may not be used for any purpose other than to identify prospective properties consumers may be interested in purchasing. Real estate listings held by brokerage firms other than The Condo Shop are marked with the IDX icon and detailed information about each listing includes the name of the listing broker.
2020 BRIGHT, All Rights Reserved. Information Deemed Reliable But Not Guaranteed. Some properties which appear for sale on this website may no longer be available because they are under contract, have Closed or are no longer being offered for sale.
Data last updated: 8/8/20 6:19 PM PDT