Another high rise apartment building is planned for the large East Market project being built at 12th and Market Streets. The East Market development, being built by National Real Estate, is a mixed-use project that will have two levels of retail along Market Street in two buildings, divided by a store-lined walkway in between. On top of the retail podium at 11th and Market, a 22 story apartment building is currently under construction. The second “west” tower will be on the opposite Market Street retail building, at the corner of 12th and Market, across from the Loews PSFS Hotel.

This second tower is being designed by BLT Architects. It will, also, be 22 stories tall. It will have 240 rental units. The tower will be set back from the street, creating a terrace on top of the retail podium along 12th and Market Streets. It will have large glass windows, black metal panels, and dark brick. The entrance to the residences will be on Ludlow Street, but the entire retail podium will have retail storefronts on all sides, including the walkway off of Market Street that will be dubbed “Chestnut Walk” because it will lead to Chestnut Street. There will be a parking entrance to an underground garage on 12th Street, across from the Loews garage entrance. The garage will have bike parking and electric car charging stations. The top of the tower will have a 4,500 square foot green roof and “micro-turbines” to produce some of the complex’s electricity. The developers are planning to seek LEED certification for the tower.

The East Market development includes 160,000 square feet of office space in a renovated building on 11th Street, and eventually will include the renovation of the historically-certified Steven Girard Building on 12th Street and a final, large phase on Chestnut Street. Across Chestnut Street is a new apartment development called “The Collins”, which has a new Target store, and around the corner from that, on Walnut Street, a new rental apartment tower called 1213 Walnut is under construction. This area of Center City is seeing much new residential development and the East Market west tower is the latest addition. 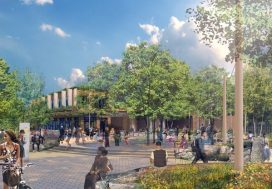 Is it the Right Time to Sell For You?
Rittenhouse Row gets a New Hyatt Centric Hotel