A Hanukkah Custom That Started in Philadelphia

Whether the miracle of the first Hanukkah is fact or legend – oil enough for just one day is said to have burned in the Temple lamps for eight – not all Jews agree.

But devoutly orthodox Rabbi Abraham Shemtov believes in miracles, and why not? Forty years ago he witnessed a kind of Hanukkah miracle, right on Independence Mall.

Better yet, he helped create it, and has watched it spread around the world.

On Dec. 14, 1974, Shemtov and four other men of the Lubavitcher sect of Hasidic Judaism gathered on Independence Mall to light what is thought to be the first menorah, or Hanukkah candelabrum, ever illuminated on public property in the world.

“Philadelphia is where we started,” the 76-year-old rabbi, with a long, gray beard, recalled last week, seated in the synagogue of Chabad Philadelphia in the Northeast. “Now it’s everywhere, in too many places to count.

“So, the idea caught fire,” he said, and smiled at his own joke.

And so the simple lighting ceremony in Philadelphia 40 years ago has become the foundational story of public menorahs for most of the world’s Jews, who no longer start at the sight of a giant candelabrum on New York’s Fifth Avenue, or Trafalgar Square in London, or at the Eiffel Tower, or overlooking the White House.

Philadelphia’s grand lighting ceremony will take place on Independence Mall on Saturday at 8 p.m., following a parade of 300 cars festooned with rooftop menorahs.

The event’s astonishing growth parallels that of Philadelphia’s official menorah, which rises 40 feet above Independence Mall – 10 times the height of the painted wooden menorah Shemtov and his colleagues lit long ago.

“We didn’t even think about getting a permit back then,” Shemtov recalled.

“We lit the first candle. There was some singing and dancing. It was a private event in public. But even so, in concept we were sharing the thing with the world.”

That the first flame stayed lit on a breezy evening Shemtov ascribes to divine approval of their decidedly unorthodox undertaking. Hitherto, lighting a menorah in public simply was not done.

“What you need to understand,” he explained, is that Jewish tradition dictated that the candelabrum be lit at home, and placed “at the spot the house shares with the outside,” typically at the front door.

“Our sages say outside is better,” he said with a shrug. “So, we brought it outside a step further.”

Menorah lighting, which for centuries had been a pious – sometimes covert – domestic ritual, would become a global statement of Jewish presence.

Shemtov credits the idea for public menorahs indirectly to Rabbi Menachem Mendel Schneerson, the late chief rabbi or “rebbe” of the Lubavitchers, who relocated the Eastern European sect to Brooklyn, N.Y., after World War II.

Founded as a Hasidic sect in western Russia in the mid-18th century, the Lubavitchers had a modern role, according to Schneerson: revitalizing Jewish mysticism and traditional observance while holding up Jewish values to the larger culture.

As part of that effort, Schneerson in 1962 assigned Shemtov to create a Chabad, or Lubavitcher community, in Philadelphia. “Do as much as you are able,” he told Shemtov. The public menorah lighting came 12 years later.

In 1979 Jimmy Carter was the first U.S. president to take part in an official outdoor menorah lighting. Three years later the custom was so well established that President Ronald Reagan referred to the giant menorah in Lafayette Square, opposite the White House, as the “national” menorah.

In 1993 Jeffrey Hoffman, a Jewish American astronaut, unfolded a portable menorah in outer space, where he was repairing the Hubble Space Telescope.

“From the mall to the White House, around the world, and into outer space,” Rabbi Joshua Plaut of Manhattan marveled last week.

Author of A Kosher Christmas, a study of modern Hanukkah, Plaut last week called Shemtov’s 1974 menorah lighting on Independence Mall “a unique moment in the history of Hanukkah,” yet one with deep roots in the Jewish notion of pirsum hanes, Hebrew for “proclaiming the miracle.”

While not all Jews believe literally that one day’s lamp oil lasted for eight, most view the holiday as an opportunity, Plaut said, to celebrate “the miracle of the survival of the Jewish people” for thousands of years.

Even so, he noted, the Lubavitchers’ new way of “proclaiming the miracle” was not universally welcomed, even among some Jewish organizations. The Lubavitchers also fought numerous legal battles with the American Civil Liberties Union for the right to display menorahs on public property.

In 1989, in a case involving Pittsburgh, a divided U.S. Supreme Court ruled that menorahs were permissible on public property because they – like Christmas trees – did not signify endorsement of a particular religion.

While Hanukkah is not a major holiday in the Jewish calendar, Shemtov – who has chaired the international Lubavitch movement since Schneerson’s death 20 years ago – contends that not one but two miracles lie at the heart of the holiday’s traditional story.

After overthrowing the Seleucid Greek tyrants who for years had crushed Jewish religious practice, the army of Judas Maccabee entered the High Temple at Jerusalem in 165 B.C.

Eager to rededicate it, they found numerous jugs of olive oil with which to fill the lamps, but nearly all had been used by the Seleucids, “rendering them questionably fit,” he explained, for ritual use.

The Maccabees, however, found one jug bearing the seal of the high priest, indicating it was still pure. “It was sufficient to keep the lamps lit for one night,” Shemtov said.

The well-known miracle at the heart of the Hanukkah story is that the oil lasted instead for eight days.

“That in itself is a miracle,” he said. “But they were also able to cleanse themselves after the war, and create new pure oil. So the miracle is also the fact that God has not only spared us [the Jewish people], but they were able to honor him with purity, in a perfect way.

“So with Hanukkah,” he said, “the rebbe maintained that as long as there is freedom, we have a responsibility to share what we believe with the world – not to convert people, but to give everyone the opportunity to learn what’s in our Bible for them.”

A public menorah is “an opportunity to share” Judaism with the world, Shemtov said. “It’s not ours to keep.”

Read the full article at Philly.com. 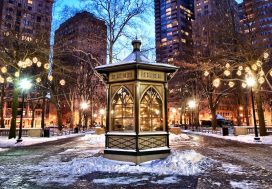 Yes, Virginia …
The 5 Worst Winter Staging Mistakes (And How to Fix Them)