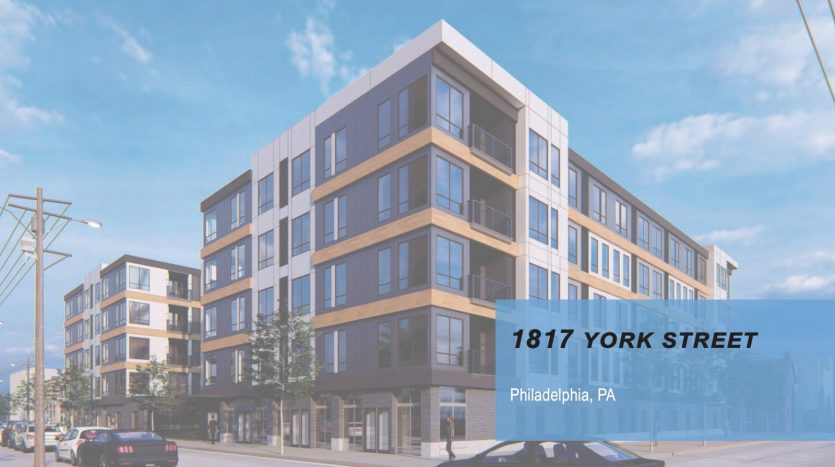 East Kensington is currently experiencing as much new development as the adjacent neighborhoods of South Kensington, Fishtown, and Northern Liberties.  The new development is mostly residential in nature, especially apartments in mid-rise buildings. Some of the developments include creative office and maker spaces.  Some of these buildings include retail spaces on the first floor. Most of the development is very modern, but some of it includes renovations of the many older industrial buildings that Kensington is known for.  York Street has been experiencing much of this development, with upwards of five new apartment buildings being built along the once forlorn stretch. The latest such development is at 1817 East York Street, at the site of the former Buck Hosiery Factory, which burned down several years ago.  This new mixed-use development will have residential space and creative maker spaces. It is being development by M & M Management and designed by Barton Partners.

The new apartment and work complex at 1817 East York Street will be five stories tall and U-shaped.  It will have 106 rental apartment units and 20 creative maker spaces. The first floor residential units might be converted to retail later.  There will be a courtyard and a second floor amenities space overlooking the courtyard. The roof will have a green roof and an amenity roof deck.  There will be 34 parking spaces on the first floor and an additional 38 bicycle parking spaces, too. The exterior will have metal panels, fibre cement board, and wood composite.  The colors will be brown and gray. There will be large windows and some Juliet balconies. The corner of Jasper and Boston Streets will have a window display for the resident artisans’ work.  The front entrance and lobby will be on the York Street side.

East Kensington is going to continue developing with residential and commercial buildings that bring back new population to the once-declining area and, also, bring new jobs and business opportunities to the neighborhood, as well.  The development will continue to be a mix of new construction and renovation of the neighborhood’s nineteenth century industrial buildings. The area around the York/Dauphin train station is seeing new apartment buildings on a site a block away from 1817 East York Street and at Second and York Streets.  Development is continuing into Norris Square and Harrowgate, as large sites are developed in East Kensington.