A new apartment building is planned for North Delaware Avenue, and it will include retail and a climbing gym, as well as, a renovated historic industrial building.  It is being built by Core Realty and designed by Stanev Potts Architects and is located at 1100 N. Delaware Avenue, across from Penn Treaty Park and the SugarHouse Casino.

The new apartment building will be six stories, and 85 feet, tall and will have 169 rental apartment units spread out along an entire block, except for the Edward Corner Building, a former rope manufacturing building at the corner at Shackamaxon Street.  That building will be renovated with ten apartment units and a commercial retail tenant.  The third and fourth floors, of the new building, will have bi-level units.  The climbing gym will be at the other corner of the building along Delaware Avenue, with a wing of the apartment building set back behind it.  The climbing gym will be 50 feet high inside, with light well skylights in the ceiling, and will be operated by Grid City Climbing.  Another commercial space for a café will be located on the other side of the lobby on Delaware Avenue.  In all, there will be 24,000 square feet of retail space.  There will be a fitness center for the residents on the lower level, as well.    There will, also, be a driveway in the middle of the complex connecting the Delaware Avenue side to the back of the building, along Allen Street and a walkway along the former Day Street, from front to back.  Day Street will continue to be paved with Belgian block and may have outdoor seating for the café.  There will be 100 parking spaces, mostly below ground, for the residents and the retail tenants and 60 bicycle parking spaces.  The exterior will have dark metal and concrete panels on the lower level and white metal panels on the upper floors, except for the wing above the climbing gym, which will have dark panels.  There will be some wood and brick on the exterior, and the Edward Corner Building will retain its original faded signage.

The developers will probably start construction later this year.  They do not need a zoning variance, like many developments in the city, because that area of Delaware Avenue has been rezoned for residential development.  Core Realty is also the developer of the former Ajax warehouse at Delaware and Frankford Avenues, which has the Fillmore music hall, Revolutions Bowling, and will soon have a new restaurant on the first floor.  Across Canal Street, from those businesses, is a new comedy club called Punchline.  On the other side of Penn Treaty Park is an old PECO electrical generation station that has recently been left vacant.  Plans are being drawn up to renovate that into a hotel and banquet hall.  Along the river, the city is slowly building a long-planned river walk.  This new apartment building will tie together several developing areas and will add to increasing demand to develop the remaining vacant sites along that stretch of Delaware Avenue. 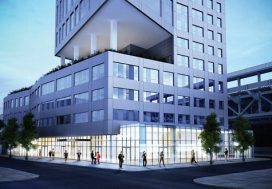 A Room With a View: Of the Ben Franklin Bridge