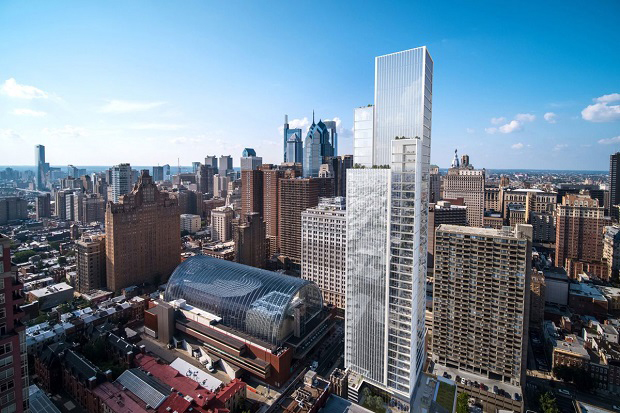 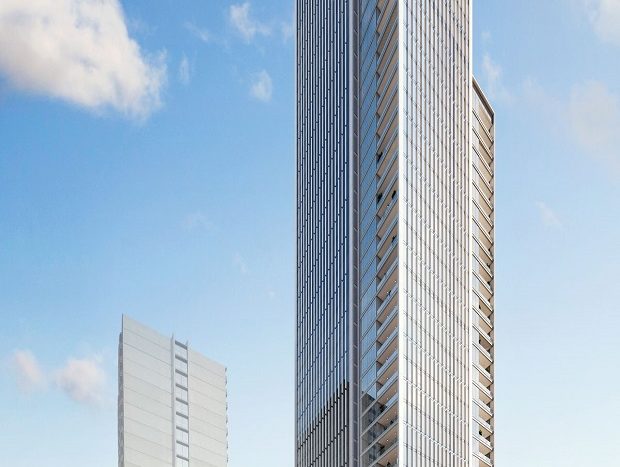 The Avenue of the Arts South, along South Broad Street in Center City, has Philadelphia’s premier performing arts venues and companies.  Within a few blocks are the Kimmel Center, the Academy of Music, the Merriam Theatre, the Wilma Theatre, the Suzanne Roberts Theatre, the Arts Bank, and the Philadelphia Film Center, making the district one of the largest concentrations of performing arts and film in the world.  Across the street from the Kimmel Center, at Broad and Spruce Streets, were two small buildings, one of which had been used as a recording studio for famous Philadelphia International Records, the creators of the “Sound of Philadelphia” style of soul music, in the 1970s. The former studio for Philadelphia International Records was badly damaged by a fire several years ago, and the building, and its small neighbor, were demolished a few years ago.  Those two properties, and a long vacant lot to the south next to Broad Street Ministries, were bought by Dranoff Properties some time ago. Dranoff Properties is now building an ultra-luxury condominium tower at that site. One of the investors is Universal Companies, owned by Philadelphia International Records executive Kenny Gamble, which invests in neighborhood development projects and uses their profits for neighborhood housing and a charter school.  This new condo tower is being designed by KPF and is being called Arthaus Condominiums.

The new Arthaus Condominium tower will be 47 stories and 528 feet tall, making it the tallest building on Broad Street except for the City Hall Tower.  It will have 108 luxury condominium units, with ten foot high ceilings, glass railing balconies, and hardwood floors. Each unit will be a corner unit and there will be bi-level penthouse units.  There will be four rooftop terraces and 36,000 square feet of amenities. The amenities will include a fitness center, a library, a board room, a club room, a cafe with a demonstration kitchen, a banquet room and adjoining catering kitchen, an acoustical music room, indoor and outdoor children’s play areas, a lawn, a yoga lawn, reflecting pools, an indoor 75 foot long junior Olympic swimming pool, a dog run, a greenhouse, gardening beds, and grills and fire pits.  There will be 150 parking spaces and bicycle storage. The first floor will have a large white table restaurant facing Broad Street. The tower will have a sleek modern design, with glass and steel trim. That modernist design inspired the name Arthaus, which is derived from Bauhaus, the name of early twentieth century modernist design.

The Arthaus Condominiums adds another ultra-luxury housing community to the Avenue of the Arts.  At the same intersection is The Atlantic, an ultra-luxury rental building that used to be an office building.  Nearby, Dranoff has built the Symphony House condominiums, at Broad and Pine Streets, and the Southstar Lofts apartment building, at Broad and South Streets.  Dranoff is planning to build another highrise condo tower at Broad and Pine, on the site of an old parking garage. Occupancy of the Arthaus Condominiums is expected to begin in October, 2021, and then construction of the condo tower at Broad and Pine is expected to begin.  The lower end of the Avenue of the Arts South is being transformed into a very wealthy address.

3.0 University Place Sets the Tone for a New High-Tech and Sustainable Office District in West Philadelphia
4 Easy Ways to Instantly Refresh Your Home for Fall