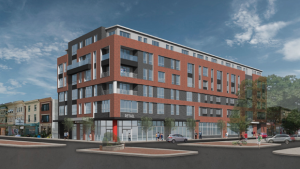 Bainbridge Street, in Queen Village, is a large open area, with drive lanes and parking spaces perpendicular to the lanes.  Down the middle of Bainbridge Street is Bainbridge Green, an open space of public plazas and green space which is slowly being renovated by the Queen Village Neighbors Association.  A large parking lot stands out at Bainbridge, Passyunk Avenue, Fifth Street, and Leithgow Street. This parking lot is about to be developed with a new apartment building, officially at 419 Bainbridge Street.  This building will be built by Gorman & Company and EZ Park and designed by JKRP Architects.

The new building will be six stories and have 54 rental units, which could become condominiums later.  The apartments will be 850 to 1,500 square foot units. The first floor will have a 23,000 square foot retail space, which may be used for a Target Store.  The parking garage will be on the second, third, and fourth floors and will have 149 spaces, some of which would be open to the public. Glazed windows will hide the garage from view.  The garage will have car share spaces and electrical charging stations. Bainbridge Street will have bike racks. A roof deck and green roof will be on top. The exterior would have red brick and metal panels, large windows, and some balconies.  The top floor will be set back from the street a bit.

Queen Village is a very popular neighborhood, but the lack of available sites for development means there is little new construction.  A similar midrise apartment building exists a couple blocks away on Headhouse Square at Abbott’s Square, the site of the former Abbott’s Dairy, and also the site of Headhouse Flats.  419 Bainbridge Street will have a similar presence on Bainbridge Green as that building does on Headhouse Square.

Looking to buy or rent in the Queen Village area? Call 215.692.6636 or email info@thecondoshops.com.