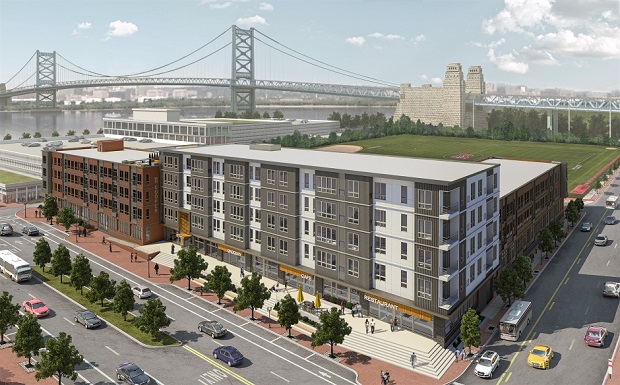 Camden’s waterfront has been experiencing much new development in recent years, as two new office buildings have been built and new parks have opened up.  City officials and developers have been eager to bring new housing options to the waterfront to add to what was started by the renovation of the main building of the former RCA Victor factory complex into the Victor Apartments fifteen years ago.  A large parking lot behind the new American Water headquarters has been redeveloped with a new mid-rise, mostly market rate apartment building. This new apartment building is called 11 Cooper and it opened up with an official ribbon cutting ceremony on June 24, 2019.  It was developed by a partnership of The Michaels Organization, NFI, and Connor, Strong, and Buckelew, known as CP Residential. The new 11 Cooper building was designed be JKRP Architects and Pennoni Engineers.

This new apartment building is four stories tall in one wing and five stories tall in another wing.  It has 156 rental units, with 125 of them being market-rate units and 31 reserved for tenants making less than 80 percent of the Area Median Income.  Approximately half of the units are already leased and tenants started moving in the week before the official opening ceremony. The units are studios, one-bedroom, and two-bedroom units.  The available studios are 480 to 500 square feet and are renting for $1,250 per month, with the affordable studios renting for $1,095. The available one-bedroom units are 661 square feet and are renting for $1,500 per month, with the affordable units going for $1,195.  The three remaining available two-bedroom units are 1,196 to 1,212 square feet and rent for $1,985, with the affordable units renting for $2,170 per month. The units have quartz countertops, energy-efficient stainless steel GE appliances (including dishwashers, washers and dryers) and wood laminate flooring.  Some units have regular and Juliet balconies. The building has several amenities, including a fitness center, a boardroom, a package and cold storage room, bicycle parking, a small lounge off of the front lobby that has a fireplace and TV, and a fifth floor club room with a kitchen, a fireplace, a TV, and access to a rooftop terrace that includes a hot tub and sweeping views of the Ben Franklin Bridge and the new Camden Tower, next door to the American Water Building.  The building is pet-friendly. The first floor has a large retail space at the corner of Cooper Street and Delaware Avenue, which is expected to have a restaurant. There are 190 parking spaces in a surface parking lot next to the building. The facade uses brick and light and dark colored metal panels. The front lobby uses extensive marble and the public spaces include art from nine different Camden-based artists. Six of the eight current employees are Camden residents.

New market-rate residential construction is such an important milestone for Camden that it’s inspiring more residential development nearby.  Two former buildings from RCA Victor’s former factory complex on Cooper Street are being considered for residential conversions. One was also used by the Camden School District as its headquarters until a few years ago.  That building is currently being renovated and might be converted to condominiums, which would be Camden’s first large condominium project ever. The other building is currently vacant, but has had some preliminary remediation work completed by state and city agencies.  Adjacent to the American Water building, a new hotel is currently under construction, also the first to be built in Camden in decades. The new neighborhood and business district being built along the Camden waterfront is helping to create a new and improved downtown for Camden that will make it a desirable place to live and to develop new market-rate housing.