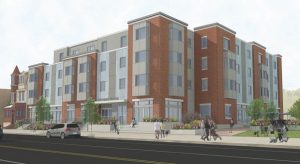 Parkside is a neighborhood that runs along West Fairmount Park.  West Fairmount Park includes an area known as the Centennial District, which commemorates the 1876 Centennial Exhibition and includes the Philadelphia Zoo, the Please Touch Museum in the former Centennial Hall from the original Exhibition, and the Mann Music Center at 52nd Street.  The blocks of 52nd Street just to the south of the Mann have been mostly vacant for many years.  South of those blocks, and just north of Lancaster Avenue, is a large shopping center, which includes Lowes, ShopRite, and Planet Fitness.  The vacant blocks acted as a barrier between the Parkside neighborhood and the Mann, but now Community Ventures and the Parkside Association of Philadelphia are redeveloping those blocks and better connecting the Mann Center and the ParkWest Town Center shopping center.  The new development is being called Centennial Village.

Centennial Village is designed by KSK Architects Planners Historians.  It includes a total of 52 new affordable housing units, mostly in a 30-unit senior apartment building on the west side of 52nd Street.  That building will have two retail spaces on the first floor. One of those spaces will house the offices of the Parkside Association, facing a public plaza on a triangular parcel of land next door.  There will, also, be a community room in that building.  Across 52nd Street will be four townhouses and a small apartment building with two more retail spaces.  North of those buildings, at the corner of 52nd Street and Parkside Avenue, is an old building with a retail space and two floors above.  That building once housed a bar, but the retail space is being renovated and the upper floors will have more apartments.  The remaining additional units will be in several new and renovated homes in formerly vacant properties in the surrounding blocks.  A small park and garden at 52nd Street and Columbia Avenue will be renovated, too.  The senior apartment building will have a brick and metal exterior and bay windows, with a terrace on the fourth floor with views of the Center City and University City skylines.  The new buildings on the east side of 52nd Street will be brick buildings with a traditional design.

Centennial Village will be a great way to reconnect Fairmount Park to the Parkside neighborhood.  The developers hope to attract a restaurant or two to the retail space.  The plan is to bring concertgoers, before or after a show, into Parkside with the new retail.  The only eatery near the Mann Center, now, is a McDonald’s at the shopping center.  The attractive affordable housing will be necessary as the neighborhood develops and the renovation of the existing vacant properties on surrounding blocks completes the improvement of this section of Parkside near the Mann.  This in turn makes the Parkside neighborhood a good location for real estate investment and future development for those who would like to live near Fairmount Park and have easy access to downtown via the Lancaster Avenue trolley.