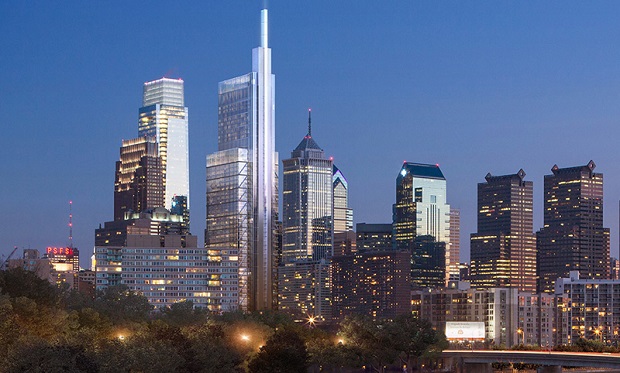 Philadelphia’s dynamic skyline has been taken to new heights as the long-awaited Comcast Technology Center opens at 1800 Arch Street, taking up the entire block of Arch Street between 18th and 19th Streets.  The Comcast Technology Center has the research and development division of Comcast Corporation’s large Center City headquarters campus and a new Four Seasons Hotel Philadelphia on the upper floors. It began construction in 2014 and has been completed a little more than a decade after the Comcast Center was built at 17th and Arch Streets next door.  The Comcast Center is the administrative headquarters of Comcast Corporation, the largest cable and broadband provider in the world, providing internet services to more than one third of U.S. households, and the world’s largest media company, owning NBCUniversal and other cable networks. The Comcast Center was Philadelphia’s tallest building for more than a decade, at almost 1,000 feet tall, but now the Comcast Technology Center is the tallest building in Philadelphia, and one of the tallest buildings in North America, and brings thousands of new jobs and workers to the growing Comcast Center Campus along Arch Street, about a block from the Ben Franklin Parkway.  The Comcast Technology Center has been developed by Liberty Property Trust and Comcast and designed by world-renowned architect Lord Norman Foster and his firm, Foster + Partners. Liberty Property and Comcast are planning to eventually build another office building on the northwest corner of 19th and Arch and another smaller building on the northeast corner of 18th Street and John F. Kennedy Boulevard.

The new Comcast Technology Center is 60 stories, and 1,150 feet tall to the very top of the 200 foot-tall glass-paneled lantern, or “light blade”, which extends up from the western side of the tower and shines very brightly at night.  The exterior of the tower has shiny stainless-steel metal panels, including a zig zag pattern along the east and west sides that connect to one another by metal panel bars stretching across the north and south sides, and floor to ceiling windows.  The lower level has a large winter garden “sky” lobby, with a 70 foot high ceiling, at the 18th Street entrance and the large restaurant Vernick Fish, along Arch Street. Two modern newsstands are located on Arch Street outside and a smooth metal-panel canopy extends over the 18th Street entrance with a sign declaring the “Comcast Technology Center”.  The underground concourse has a couple large retail spaces, some of which is likely to be occupied by Jeff Leatham Floral Designs, and a center concourse which will have retail kiosks and is open to the winter garden sky lobby. The lower concourse is connected to the Comcast Center, and its lower concourse and food hall, by a winding tunnel draped by panels with scenes of Philadelphia neighborhoods known as “Connection”, by artist Sarah Zwerling.  Parking is located beneath the lower concourse and accessible on 19th Street, but there is access to Suburban Station, and the vast SEPTA regional rail system, through the Comcast Center concourse. The bi-level winter garden sky lobby has a mezzanine level, where workers access the elevators, and which has Vernick Coffee Bar and the Universal Sphere. The Universal Sphere is a 360 degree-domed theatre, with 4-D videography by DreamWorks Animation inside, similar to attractions at Universal Theme Parks.  The program inside is a short 4-D video called “The Power of I”, produced by Universal Studios, directed by Steven Speilberg and narrated by Peter Coyote, which explores the power of ideas and imagination in dramatic fashion. The lobby, also, has noteworthy works of art, especially the inspirational quotes that scroll across the ceiling of the lobby in nine digital ribbons, called “For Philadelphia” and designed by artist Jenny Holzer, and “Exploded Paradigm” by British artist Conrad Shawcross, which is a 60 foot-high tetrahedron of shiny stainless steel triangular panels connected to a tall cast iron base starting on the lower concourse.  The winter garden sky lobby has several ficus trees, wooden block flooring, and wooden slats along the sides and ceiling, as well as, metal panels along the sides of the elevator shafts and the escalators leading to the mezzanine level.

Comcast occupies all of the floors above the winter garden lobby, up to the 48th floor, and has moved in 4,000 new workers to the city in a 1.3 million square foot technology and creative center.  The goal of the Comcast Technology Center is to be a vertical technology and creative campus that competes with any large tech and creative development campus in a suburban setting and to, therefore, compete with those suburban campuses for top talent from all over the world.  The designers worked to give this tech and creative development campus in a skyscraper the kind of workspaces that high-tech and creative workers would like to work in, but in an urban downtown that these workers often prefer to live in, or can commute to by numerous rail lines.  Most of the workspaces are loft-style spaces, with plenty of artwork by local artists, and with some rest areas and even games. There are three-story stacked atriums along the eastern side, visible from the street and the Comcast Center plaza. At the lowest Comcast floors are television studios, currently being used by NBC10 and Telemundo62, but possibly used eventually for national broadcast and internet programming.  Several floors up is the Ralph J. Roberts Forum, named after Comcast’s late founder, which is a 500-seat amphitheatre used for lectures, movie and television premieres, book signings, and debates, including a recent mayoral debate. Another important space is the LIFT Labs, an entrepreneurial program for startups and innovation in the fields of technology, connectivity, media, and entertainment that utilizes Comcast NBCUniversal’s network of partners, brands, and mentors.  A restaurant-style cafeteria space will occupy the 27th and 28th floors and a large fitness center will occupy the top floors of Comcast’s portion of the tower, right below where the building thins to a slender portion that houses the Four Seasons Hotel Philadelphia. The workspaces follow guidelines for sustainable design and healthy workspaces and the whole Comcast Technology Center will be LEED Platinum-certified.

The Four Seasons Hotel Philadelphia is the highest-situated hotel in the United States and all of North America, beginning on the 49th floor in a thinner portion of the Comcast Technology Center.  It has 219 luxury guest rooms, including 39 suites, and the most high-end of services and amenities. The hotel provides the X1 experience and gigabit speeds. There is a fitness center, a salon, and a spa and infinity pool (not an Xfinity pool though) on the 57th floor, with amazing views of the neighboring Comcast Center, and meeting rooms and services for business meetings and a grand ballroom for family and social events.  The hotel is accessible by a porte-cochere lobby at the ground level at the corner of 19th and Arch Streets, which leads to glass elevators facing northwest to the Ben Franklin Parkway and Fairmount Park that take visitors to the very top floor and the hotel’s main lobby. The hotel’s top floor lobby is adjacent to work rooms and the meeting spaces, as well as, the very high-end restaurant Jean-Georges, by famed chef Jean-George Vongerichten, and the JG Sky High lounge.  JG Sky High lounge is directly off of the Four Seasons lobby, with stairs leading down into Jean-George that are flanked by vertical fountains. The 60th floor provides some of the most complete and breathtaking public views of Philadelphia, and the highest at more than 900 feet above the ground, and to enhance the experience of the city views the shared ceiling of the lobby, Jean-George, and JG Sky High have adjustable mirrors that reflect the city from the high ceilings.

The Comcast Technology Center is one of the most important developments in Philadelphia’s history.  The impact of 4,000 new technology and creative jobs in the heart of Center City and the historic prominence of the new technology and media platforms which will be created within this new technology and creative center cannot be overstated.  The Comcast Technology Center adds greatly to the scientific and technological focus of the adjacent Parkway. The earliest photographs created in the United States were in a lab at 8th and Ludlow Streets, around the corner from the location of the Franklin Institute then, now the Philadelphia History Museum at 7th and Ludlow.  Having a major campus for the development of new technology and media around the corner from the current Franklin Institute location is quite fitting. The design of this highrise tech and creative campus may be a model for other such highrise tech and creative campuses. The new Four Seasons Hotel Philadelphia, along with the very high-end restaurants and the Universal Sphere, creates a new tourist destination attached to the existing Comcast Center.  The public top floor allows for a new view out over Philadelphia and the surrounding region and the quarter mile tall super skyscraper, topped by a bright lantern, adds to the image of Philadelphia as a dynamic and growing center of technology, creativity, and prosperity. The lantern atop the tallest tech and media development center in the world, part of the headquarters of the largest media and internet provider in the world, is reminiscent of the Alexandria Lighthouse, a preeminent beacon meant to inform people in its day as the Comcast Technology Center does today.