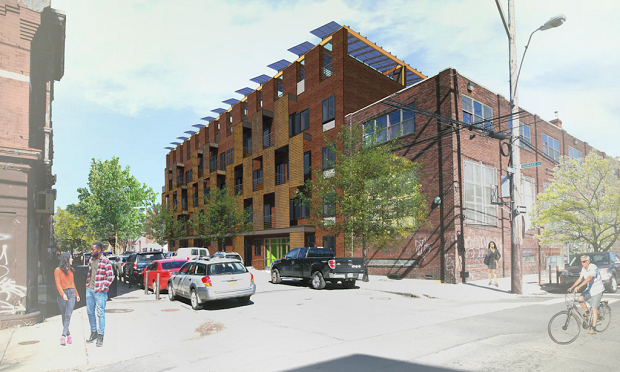 Copper Flats will have eighty duplex rental units where the warehouse is now.   There will be eight artists’ studios on the first floors facing the North Howard and North Hope Streets sides.  The exterior of these units will have dark brown brick, brown metal panels, and balconies with metal shading screens.  There will be 26 parking spaces behind the artists’ studios on the first level. There will be bicycle storage. The roof will have a green roof and solar panels in a sawtooth pattern, similar to the warehouse being demolished.  The developers want Copper Flats to be LEED-certified and are employing very energy efficient Passive House – Net Zero technology and building features. Passive House – Net Zero technology and building features allow the development to use very little energy and create new energy, so that the whole development creates as much energy as it uses and has no carbon footprint.  The two-story building along Norris Street, that will remain, will be converted into offices for Onion Flats, with two apartments at the corners of the first floor.

Copper Flats helps develop East Kensington as a creative hub and a popular residential neighborhood, after decades of decline.  The development is a block and a half away from the Berks Station of the Market/Frankford line. As East Kensington develops, more mixed-use projects will bring housing, creative spaces, and retail to a neighborhood that is constantly growing in popularity.  Onion Flats helped to revitalize Northern Liberties and now they are bringing innovative new developments to a new neighborhood.