Developers Reach Agreement with Dept. of Interior to Renovate Former Family Courts Building, on the Parkway 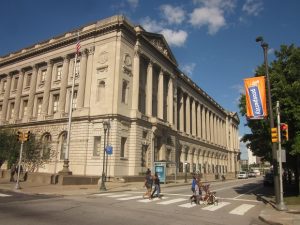 Developer Peebles Corporation has recently reached an agreement with the Department of the Interior, and the National Park Service, to renovate the historically-certified former Family Courts Building, at 1801 Vine Street just off of the Ben Franklin Parkway.  The Family Courts Building was built during the Great Depression, funded by New Deal programs, and designed by famed architect Julian Abele as a companion to the Central Library next door.  The buildings were inspired by historic palaces on the Champs Elysees in Paris.  The interior of the building has historically-certified murals that were painted by New Deal-era artists.  It has been vacant for a few years, ever since the Commonwealth Family Courts moved to a new building at 16th and Arch Streets.  Peebles Corporation purchased it shortly after it was vacated and now they plan to renovate it into a luxury hotel.

Peebles Corporation had planned to renovate the building in 2014 with hotel operator Kimpton Hotel and Restaurant Group, but that plan had been scuttled by the Department of the Interior because the developers wanted to demolish much of the interior rooms to build the new guest rooms.  It’s not certain whether Peebles will work with Kimpton this time around.  Kimpton has experience operating luxury hotels in Philadelphia.  They are the developers and operators of the Hotel Palomar, at 17th and Sansom Streets, and the Hotel Monaco, at 5th and Chestnut Streets.  Kimpton was planning to make the former Family Courts Building a more luxury brand than those two.  It would have had an upscale restaurant and bar, a spa and fitness center, a 3,500 square foot ballroom, meeting and board rooms, and approximately 200 guest rooms.  The new plan could have similar amenities, which is likely for a luxury hotel in a premier location like the Parkway, but it is uncertain how many guest rooms it will have, especially given the concern for the Interior Department’s requirement to keep existing court rooms and judge’s chambers largely intact.

The Philadelphia Inquirer is now reporting that the National Park Service and the Pennsylvania State Historic Preservation Office have agreed to give Peebles a historic tax break equal to approximately $14.6 million.  Peebles wanted the tax break to defer construction costs and they now have a definite number of how much funding they need to raise from lending institutions to begin construction.  That makes construction more likely to start this year, but first Peebles must choose a hotel operator and finalize their plan to submit to not only the Department of Interior and National Park Service, but also to city and state agencies and the Logan Square Neighbors Association.

A luxury hotel in this beautiful landmark building would add a striking presence to the premier location of the Ben Franklin Parkway.  The Parkway, and the Franklintown neighborhood, are seeing a spate of new development.  Across Logan Circle, from the Family Courts Building, the former Four Seasons Hotel has been rebranded as The Logan and the Four Seasons brand is moving to a new hotel at the top of the new Comcast Technology Center, more than 900 feet above the ground.  The Family Courts Building is in-between the Central Library and the Barnes Foundation, to the west, and the new Mormon Temple, Mormon Meetinghouse, and the luxury high rise apartment tower at 1601 Vine Street, to the east.  So, renovation of the Family Courts Building would complete the recreation of a once bland avenue off of the Parkway.