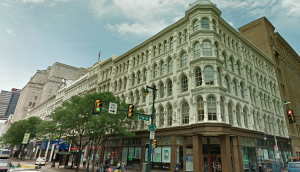 Construction making way for video billboards set to line the roof of the former Lit Bros. building on Market Street has begun. Philly.com’s Maria Panaritis reports $10 million went into the project with an additional $10 million going to updating nearby public amenities.

Investors and other involved parties are aiming for a New Year’s Eve light up as the area has long been a ghost of its retail past. The “stadiumlike, wraparound, LED signs” are expected to encourage redevelopment and bring in revenue, something it has already started doing.

Indeed, advertising contracts for billboards of this nature can be very lucrative. Merlini estimated that annual revenues from the signs to be installed atop the Lits building would be in the “seven figures.”

“We didn’t know what a revenue source it would be until we got into it,” he said, adding that advertisement contracts were already in place.