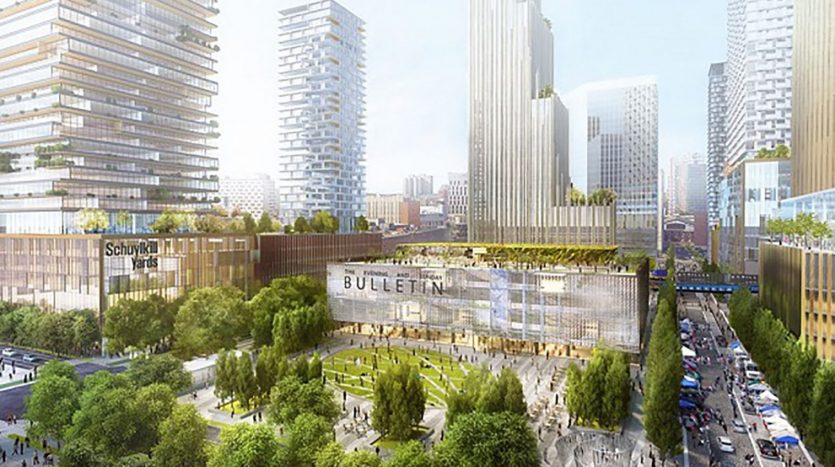 The property at 30th and Market Streets has had a parking lot for the former Bulletin newspaper building for nearly sixty years.  The lot sits between the former Bulletin Building and 30th Street Station. That parking lot has recently been replaced with a big new park by Brandywine Realty Trust and Drexel University.  This park is intended to be the first project of a large new $3.5 billion fourteen-acre project being developed by Brandywine and Drexel to be known as Schuylkill Yards, which will recreate the area around 30th Street Station with at least a dozen new office and residential towers and 6.5 acres of open space stretching north over the 30th Street rail yard.  This new park is known as Drexel Square Park at Schuylkill Yards and it recently officially opened with a ceremony and ribbon cutting on June 10, 2019. This new park will be a new gateway for University City and West Philadelphia and it will be a public focal point for the Schuylkill Yards development and the new downtown business district and neighborhood being created on the University City waterfront surrounding 30th Street Station.  The new park has been designed by West8 and SHoP Architects.

Drexel Square Park is 1.3 acres, stretching from Market Street to JFK Boulevard along 30th Street, directly across from the train stations’ western entrance and adjacent to the former Bulletin Building.  It’s central feature is an elliptical-shaped network of pathways made of white granite meant to project the Earth’s meridians, with green grass in between the pathways and around the ellipse. The elliptical lawn is surrounded by more granite in a striated pattern and gradual steps along some of the ellipse’s perimeter.  The outer edge of the park has some raised planting beds filled with various types of shrubbery and perennial flowering plants and, perhaps the park’s most noteworthy feature, 23 Meta Sequoia (Dawn Redwood) trees that are already about 25 feet in height. In between the planting beds are several accessible walkways from the surrounding sidewalks.  The planting beds also have custom granite seat edges. The interior of the park has dozens of tables with parasol umbrellas and hundreds of chairs. There is ground and overhead lighting throughout. New artwork will be added soon and the SEPTA head house into the 30th Street Market/Frankford line and trolley station will be replaced soon. Brandywine Realty is, also, searching for a tall aluminum flag pole with a rounded base that used to stand in the former parking lot.  That flag pole was removed when the park construction began, but many would like to see that flag pole returned to the site eventually.

Drexel Square and Schuylkill Yards are a major step forward for University City and part of a larger plan to improve the environs around 30th Street Station. The former Bulletin Building is about to be renovated by Brandywine for a new office space for prominent biotech company Spark Therapeutics and Brandywine plans to start building a high-rise office building and a high-rise apartment building on JFK Boulevard as early as next year.  JFK Boulevard will, also, be getting a new streetscape and the closed underground tunnel between the 30th Street subway station and 30th Street Station will be renovated into a new concourse with retail shops and a small food hall. The grounds around 30th Street Station, including “The Porch” along Market Street, are about to experience more renovation as well. Drexel Square is about to become a downtown public space on par with Philadelphia’s original five Center City squares: Rittenhouse, Center (City Hall), Washington, Logan, and Franklin Squares.