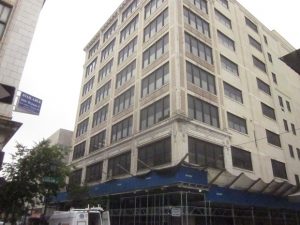 Market Street East will get a big new retail and apartment development in the coming years.  The “East Market” development will add significant new retail space and hundreds of new apartments, along with flashy digital advertising signs along Market Street.

The Planning Commission’s Civic Design Review committee heard about plans for the soon-to-be-built East Market mixed-use project on Tuesday, October 7.  The first phase of that project will include a 20-story, 366-unit apartment tower and 160,000 square feet of retail space along the entire south side of the 1100 block of Market Street.  The developers will, also, renovate an old warehouse and office building on 11th Street into 150,000 square feet of “cool” office space.  The next phase would include the construction of a high rise apartment tower on top of the northwest corner of the first phase.

Michael Prifti, of BLT Architects, made the presentation on behalf of the developers National Real Estate Development.  He mentioned the details of the project, which I just stated above, and pointed out that the developers would like to continue the development onto Chestnut Street, and renovate the historic Stephen Girard Building on 12th Street, in later phases.  The retail will be on the first two levels along Market Street and will have large windows.  One distinguishing feature of the façade is large advertising signs, which the developers are allowed to have because of new regulation passed in 2011 which allow such large advertising signs along several blocks of Market Street.  These signs will extend onto 11th and 12th Streets just 15 feet and the exact look of the signage will depend on the tenants.  The Planning Commission would need to review the signs.

The design of East Market will be different from other developments on Market Street because there will be a pedestrian promenade, lined with honey locust trees, in the middle of the block leading to Ludlow Street.  This promenade and Ludlow Street will be lined with smaller stores.  The second level will have “mid-box retail capacity”, which is in demand in Center City.  The future phases would extend the promenade to Chestnut Street.  The façade of the whole development would have lots of gray panels and some glazed windows.  All parking, and the loading dock, is underground.

During the committee discussion, members were concerned about too much shade on the promenade, the quality of the materials, the amount of parking and bike spaces, and lighting.  A representative of the developer briefly mentioned that there would be 176 parking spaces, 406 bicycle storage spaces, 24 street level bike racks, 16,000 square feet of green roofs, and six electrical car charging stations in the garage.   Committee member and architect Cecil Baker asked whether a larger promenade could be built to create a “sense of place”.

The committee voted to end the CDR process for this project after the committee discussion.  The developers held a ground breaking ceremony a couple weeks ago and are currently demolishing the two story building that is there right now. 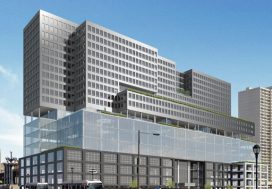 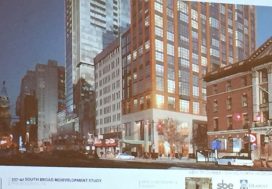