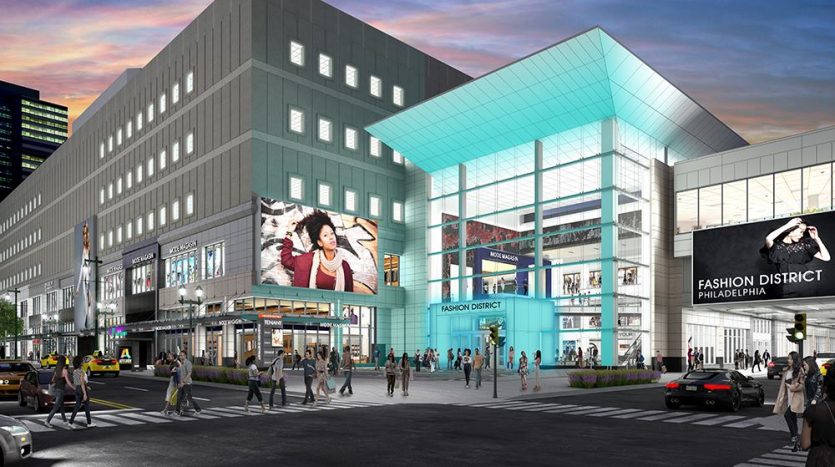 East Market Street has long been Philadelphia’s largest shopping district, running in the heart of Center City between the Independence Mall and City Hall.  In the nineteenth century, Market East, as it came to be known, had one of the largest concentrations of stores in the United States and saw the development of some of the first department stores in the world.  Like most big city downtown shopping districts, its height of popularity was in the 1920s. After the economically-disruptive eras of the Great Depression and World War II, big city shopping districts like Market East started to decline as many middle class shoppers moved to nearby suburbs, or quasi-suburbs in outlying neighborhoods of big cities, and retailers moved to new suburban shopping malls and strip malls that were on and near major highways, easily accessible by car.  In the 1970s, city leaders and store owners along Market East decided it would be best to redevelop parts of the declining shopping district along Market Street with new stores and a large indoor shopping mall, similar to suburban malls. This new mall, on the north side of Market Street, would have access to Market East’s large concentration of rail transit, including the Market/Frankford line, PATCO, and the regional rail system at Market East Station, the descendant of the Reading Railroad’s Reading Terminal Station nearby.  Eventually, the redevelopment plans became The Gallery at Market East, stretching over three blocks from the older Strawbridge and Clothier Department Store, on the 800 block of Market, to 11th Street. The Gallery was built in two phases, one completed in 1977 and another in 1983, and it included more than a million square feet of retail and a series of below ground food courts, with access to Market East Station down there. The retail was decidedly middle-class national chain retail, with a few minority-owned local businesses and a discount store run by Strawbridge and Clothier, known as Clover, which was later replaced by J.C. Penney’s.  The Gallery had large entrances at 9th and 10th Streets, connections to Strawbridge’s and the former Lits Brothers Department Store to the east and the former Reading Terminal Station and Reading Terminal Market to the west. The exterior had few windows and doors, with large blank walls facing Market and Filbert Streets, similar to suburban malls. Even though The Gallery had easy access to rail transit, it had two large parking garages attached to it.

The Gallery never attracted many of the middle class and well-to-do Center City and suburban shoppers that the developers and city leaders were hoping that it would, but it did provide necessary national retail to working class city residents and kept some of this national retail in Philadelphia, at a time when many of these retailers had left other cities to focus entirely on suburban shopping malls.  Over time, The Gallery declined in popularity, too, and vacancy increased on the upper floors. By the 2000s, the retail had become decidedly low end, with KMart and Burlington Coat Factory anchoring the mall, as J.C. Penney’s and Strawbridges closed down. At that point, city leaders and the mall’s owners, Pennsylvania Real Estate Investment Trust (PREIT) and Macerich, decided it was time for a major renovation.  After many years of planning amongst many stakeholders, including the City of Philadelphia and SEPTA (who share in the mall’s ownership) a plan for a major renovation was created and renovation work began in 2015. Parts of the mall slowly shut down and access to the underground concourse and Market East Station was disrupted for years while construction progressed. The Gallery was renamed Fashion District Philadelphia and recently reopened with a grand opening ceremony and ribbon cutting on September 19, 2019.

Fashion District Philadelphia has several major aspects.  It has retail, entertainment, food, and arts and culture. It has almost as much space dedicated to retail, food, and entertainment as The Gallery, more than 900,000 square feet of space, making Fashion District Philadelphia still the largest downtown shopping mall in the nation.  It will have additional space devoted to coworking spaces. The inside has a large bright atrium, with much artwork and lighting, and the existing skylights. There is a large hanging digital sign near the 9th Street entrance. There is still the central walkway below ground, which is technically Commerce Street, connecting Fashion District to the rail transit and neighboring retail buildings.  Perhaps the biggest change in the design for Fashion District, compared to The Gallery, is the exterior. Fashion District’s exterior has granite tiles and large windows all along the first and second floors. Several retail spaces have doors leading to Market and Filbert Streets in the middle of the block and on corners, a big change from the insular Gallery design. A grand entrance is at 9th Street, with a tall glass vestibule and cantilevered roof.  The exterior, also, has new billboards, including several digital screens near the entrances and at corners. The sidewalk has new street trees, benches, bike racks, and lighting.

Fashion District will bring new entertainment options to Center City.  The third floor will have an AMC multiplex movie theatre which will have reclining chairs, food and drinks delivered to one’s seat, and a Dolby Cinema auditorium with enhanced sound and screen brightness.  The AMC theatre will be able to support premium format screenings. Next to the AMC theatre will be Round1 Bowling and Amusement, which will have a bowling lounge, arcade games, billiard tables, ping pong tables, darts, karaoke, and a Kids Zone.  City Winery is located on three levels and has an extensive selection of wines, food, and two performance spaces. The entertainment businesses will be accessible on Filbert Street, which will be improved with new lighting, signage, and outdoor seating.  In addition to the kiosks and food served at the AMC theatre, Fashion District has a food hall on the lower level, next to the entrances to Market East Station and the Reading Terminal Building, which has several concessions, such as Pei Wei, Oath Pizza, Freshii, Burger Fi, Chickie’s and Pete’s, and Gallery favorite Tiffany’s Bakery.  Starbucks will have a first floor location facing Market Street. In addition to all the retail, entertainment, and eateries, Fashion District has two coworking spaces, REC and Industrious. These coworking spaces enhance the growing design district that is forming around Market East, with the Marketplace Design Center having moved nearby and the headquarters of Five Below across from the former Strawbridge’s store.  In addition to the coworking spaces and public art, Fashion District adds to the area’s culture by having a space for visiting art exhibits at Wonderspaces, near the AMC Theatre and Round1.

The opening of Fashion District adds an incredible new mix of retail, entertainment, food, nightlife, art, and creative space in the heart of Center City.  This encourages even more demand for housing, hotel stays, and office space and continues the development of the area’s growing design district. Fashion District will make the area around Market East busier in the evening and will likely attract the many tourists from the historic district and the many conventioneers attending conventions around the corner.  New development will become more likely on the south side of Market Street, where PREIT owns some properties, and in nearby neighborhoods. PREIT and Macerich, also, plan on building highrises on top of the mall, which was originally built with foundations strong enough for such development. Fashion District helps make Market East a premier shopping, dining, and entertainment district again and makes it a more important area of Center City and Philadelphia.

The data relating to real estate for sale on this website appears in part through the BRIGHT Internet Data Exchange program, a voluntary cooperative exchange of property listing data between licensed real estate brokerage firms in which The Condo Shop participates, and is provided by BRIGHT through a licensing agreement. The information provided by this website is for the personal, non-commercial use of consumers and may not be used for any purpose other than to identify prospective properties consumers may be interested in purchasing. Real estate listings held by brokerage firms other than The Condo Shop are marked with the IDX icon and detailed information about each listing includes the name of the listing broker.
2020 BRIGHT, All Rights Reserved. Information Deemed Reliable But Not Guaranteed. Some properties which appear for sale on this website may no longer be available because they are under contract, have Closed or are no longer being offered for sale.
Data last updated: 12/2/20 2:55 AM PST