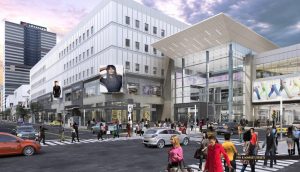 The Gallery shopping mall, on the north side of East Market Street from 8th to 11th Streets, is soon to have a complete makeover that has been planned for many years.  The entire shopping mall, built in phases between 1975 and 1982, will be gutted and revamped with a mix of new retail, including outlet stores with luxury brands.  The majority of the Gallery’s current stores have already closed.  The Planning Commission heard about the plans at their monthly meeting on May 19.  The Planning Commission’s approval is advisory to City Council, which is considering several bills to help finance the project and rezone the large Gallery property.

The Gallery is owned jointly by the City and the Pennsylvania Real Estate Investment Trust.  The new deal to renovate the mall would transfer ownership entirely to PREIT, who is redeveloping the mall in a joint partnership with Macerich Company, a major national mall developer and owner like PREIT.  The renovation is being designed by architects JRPA.  The renovation will conform to design elements from a previous master plan for Market East.  The redeveloped mall will have street level storefronts, a more diverse, largely glass façade than the current solid walls along Market Street, and digital billboards.  The objective is to animate Market Street.  There will, also, be new planters on the sidewalk, awnings over the windows, and large advertising pavilions near the Market Street curb.  Inside the mall, a continuous corridor will allow shoppers and pedestrians to walk directly through, as the Kmart has been closed and that space will have multiple stores and a corridor like the rest of the mall complex.  The top floor may have a multiplex movie theatre.  No tenants have been announced yet, but PREIT and Macerich are negotiating with upscale grocery store chain, Eataly, and they would like to have outdoor cafes along Market Street.

The deal with the city will give the developers tax breaks and taxpayer-funded payments for public maintenance for 60 years.  The developers promise to guarantee access to SEPTA’s Jefferson Station and to hire mostly city residents as construction workers.  Council is debating the bills now, but they are expected to pass Council before their June recess.  The developers will begin demolition of parts of the mall soon and begin actual construction in the autumn, with an expected completion date in 2017.

The data relating to real estate for sale on this website appears in part through the BRIGHT Internet Data Exchange program, a voluntary cooperative exchange of property listing data between licensed real estate brokerage firms in which The Condo Shop participates, and is provided by BRIGHT through a licensing agreement. The information provided by this website is for the personal, non-commercial use of consumers and may not be used for any purpose other than to identify prospective properties consumers may be interested in purchasing. Real estate listings held by brokerage firms other than The Condo Shop are marked with the IDX icon and detailed information about each listing includes the name of the listing broker.
2020 BRIGHT, All Rights Reserved. Information Deemed Reliable But Not Guaranteed. Some properties which appear for sale on this website may no longer be available because they are under contract, have Closed or are no longer being offered for sale.
Data last updated: 1/18/20 1:04 AM PST