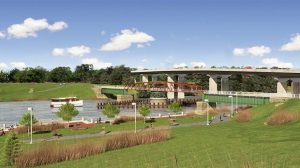 The lower Schuylkill River was once dominated by industry, but as that industry has declined the city and community groups have been looking for new uses for the unused river banks.  The Schuylkill River Development Corporation has been slowly building a riverwalk, known as Schuylkill Banks.  Schuylkill Banks extends along the east side of the river in Center City, now down to Christian Street.  It begins again along the Dupont Crescent, where Dupont Corporation once had a paint testing facility that is now being converted into a high-tech research and office park by the University of Pennsylvania.  Further south on the west side of the river, the Bartram’s Mile section of the trail extends from just south of the Gray’s Ferry Avenue Bridge down to Bartram’s Garden, the nation’s first botanical gardens.  The Dupont Crescent and Bartram’s Mile sections are not connected, but a plan to rebuild a rusty, unused railroad swing bridge will finally connect the two sections and be a vital link to eventually connecting Bartram’s Garden to Center City with the Schuylkill Banks trail.

The swing bridge is 115 years old and has been owned by different railroad companies, most recently Conrail.  Conrail has agreed to donate the bridge to the City of Philadelphia for the reconstruction.  The steel truss bridge would historically swing around to be parallel to the river bank when a boat needed to sail up or down the river.  It had been left open for many years, making it unusable as a railroad crossing anymore.  After considering reusing the bridge, the Schuylkill River Development Corporation has decided to replace the steel truss with a new lighter span for pedestrian use only.  The swing mechanism will, also, be replaced, allowing boats to continue to sail by it when it is opened.  The newly rebuilt bridge will have lighting and pedestrian overlooks.

Connecting the two trails on the lower Schuylkill is an important step forward for Southwest Philadelphia.  The Schuylkill River Development Corporation and the Philadelphia Industrial Development Corporation have been planning to redevelop the former industrial land with high-tech office and research parks, similar to what Penn is doing at the Dupont Crescent, known as the Pennovation Center.  Residential development is possible on some of the sites, and increasing demand and property values will likely make the nearby neighborhoods more popular for residential development, as well, with such a popular amenity along the river.  The City and the Schuylkill River Development Corporation expect to begin construction in March of 2018 and be completed by December of 2019.