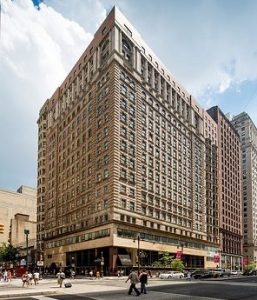 The large Beaux Arts-style building on the southeastern corner of Broad and Chestnut Streets, formerly known as The Avenue of the Arts Building because of its central Broad Street location, has recently been renovated into luxury apartments.  The former Avenue of the Arts Building was originally built as an office building in 1895, among the first large buildings on Broad Street in Center City, and was most recently used as a student apartment building for the Art Institute of Philadelphia.  The fourth through the seventeenth floors were purchased by MRP Realty in 2014 and has been renovated into Griffin Center City, with 217 studio, one, and two bedroom rental units and luxury amenities.  The first floor still has Capital Grille and a vacant retail space on Chestnut Street and the second and third floors will eventually have a major retailer or two.

Griffin Center City has a fitness center and a business center on the lower floors and an extensive game room on the new 18th floor, with a sports simulator, a pool table, foosball, and shuffleboard.  The game room, also, has a bar and tables and the management holds regular events for the tenants.  The game room leads to a roof deck over Broad Street, which also has tables and grills and amazing views to the west, south, and north.  The lobby and amenity areas have a modern design in contrast to the traditional design of the building, including a lighted granite front desk, glass lanterns hanging from the lobby ceilings, and a wooden stairwell with glass railings leading to the game room.  The developers decided to save, but deactivate, one noteworthy feature in the nineteenth century building.  A decorative stairwell with tile and wrought iron railings, leading to the elevator lobby, is encased behind windows as decoration for residents.

Griffin Center City is a wonderful adaptive reuse of a landmark Center City office building, like several others on Broad Street, North and South.  Just a few blocks away, at Broad and Spruce, the former Atlantic Building is now being renovated into luxury residences, after some delay.  The W/Element Hotel is under construction, on the next block of Chestnut Street, and other luxury hotel and residential developments are under construction, or planned, for South Broad Street at Locust, Spruce, and Pine Streets and Washington Avenue.