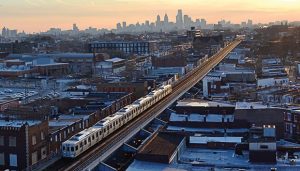 Fairhill is a neighborhood in Kensington bounded by wide Lehigh Avenue to the south, Sixth Street to the west, Front Street to the east, the Amtrak rail lines to the north.  It is characterized by much of Philadelphia’s classic nineteenth century industry and has historically been a working class neighborhood, which has welcomed newcomers to the city and country for generations.  In recent decades, as much of the classic industry has declined in Kensington, Fairhill has seen the loss of jobs and residents, and now has many vacant buildings and lots.  Local community group HACE has been working for some time to revitalize Fairhill, including building new housing, new schools, renovating parks, and revitalizing the large retail district along North 5th Street, known as El Centro do Oro.  That business district is known for its metal palm trees and colorful sidewalks.  At the corner of 5th and Lehigh, is a new community center and gallery for the neighborhood arts organization, Taller Puertorriqueno.  HACE is now planning for the future by creating a community-driven neighborhood plan called HACE 2025.  The plan would prioritize neighborhood improvements to the quality of life, economy, and infrastructure.  Strong neighborhood groups, with clear plans and priorities, can make a world of difference in many struggling neighborhoods, such as Graduate Hospital, Mill Creek, and South Kensington/Ludlow.  Fairhill is, already, seeing development and investment interest near Lehigh Avenue, as development continues to the south in South Kensington and Fishtown.

The HACE 2025 Plan was administered by KSK Architects and funded by the Wells Fargo Regional Foundation.  It was driven by holding five community meetings, which included neighborhood residents, local business owners, and city officials.  Residents were asked what their most important issues were and their areas of concern.  Residents were concerned about housing, economic development, retail corridor development on Fifth and Front Streets, senior services, education, and open space.  One literal area of concern was the land around the Conrail freight rail tracks, which have become a temporary home for heroin users and dealers.  Neighborhood residents were very concerned about crime near the tent city that houses the drug users.  Among the improvements that neighbors wanted for Fairhill are new playgrounds at parks, more senior services, a new neighborhood public high school in the former Fairhill Elementary School, and a health center, perhaps run by Temple University.  The plan also calls for extending some streets through former industrial sites, a green median in the middle of wide American Street, and a possible street or farmers market.

Residents believe North 5th Street is a special area of focus.  It is seen as a regional destination for the Philadelphia metropolitan area’s Latino community and has the potential to be a tourist destination, like the Ninth Street/Italian Market.  The police are, also, implementing a program in the area called Crime Prevention through Environmental Design (CPTED) to reduce crime along the Conrail line.  CPTED improvements to the Conrail line would include new lighting, fencing, cleaning up litter, and community gardens.  New housing has been proposed at A and Lippincott Streets, similar to rowhomes built on Lawrence Street a few years ago.  A former Conrail building on Indiana Avenue is proposed to be converted into a senior housing building to be called Casa Indiana.  The plan advises changing some industrially zoned sites to a commercial/residential mixed-use zoning classification, as well as, rezoning some multi-family properties to single family.

The HACE 2025 Neighborhood Plan could lead the way to sustained improvements in the quality of life and development in Fairhill, for a mix of incomes.  Fairhill seeks to have the kind of success of popular mixed-income neighborhoods, such as South Kensington, Graduate Hospital, West Powelton, or Manayunk.