Walk into Condo Shop’s office in the Aria on Locust off 15th Street, and the energy hits you as if you had stuck your finger in a hot socket. It’s a narrow former townhouse with two floors, on which a dozen or so Millennials mix it up with a couple of Baby Boomers and they bounce ideas off one another — on the stairs, as they are getting coffee or answering the phones. Together they have changed the way real estate is bought, sold and rented in the Philly area — such as Park Towne Place Premier (rooftop pool above) , which has just undergone a $300 million renovation.

From another important date.

No, not that kind, you gossip mongers!

A date with Michael Raffl, the Flyers’ 27-year-old Austria-born on-the-come left-winger who needs a place to live. 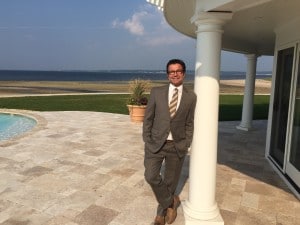 In South Jersey, naturally, which is where it seems all the Flyers live — cheaper gas, close to the Skate Zone, lower taxes (except, of course, property), better schools, and the most important element:

Which is a quality that Bolaris (above)is unfamiliar with, as is apparent when he finally shows up at Del Frisco’s on a late Friday afternoon and the heads turn.

He meets up with a reporter and his colleague from Condo Shop, Eric Axelson, and they catch up quickly on the Raffl deal before he elaborates on his relatively new gig:

That’s a mouthful, but it’s the best way to describe how Bolaris, who made his bones in Philly 25 years ago as a weatherman on Ch. 10, has transitioned into a key player in one of the hottest real estate firms in the Philly region.

You may not don’t need a weatherman to know which way the wind blows, but Condo Shop needed Bolaris — who “has a Flyers tattoo on my ass” — to raise its profile and expand its business in the sports and celebrity world.

Or, as he told the Daily News last month, “I’m starting to make it rain in the real-estate market!”

“I have an advantage because I have been in their living rooms for 25 years,” Bolaris says after catching his breath,

“I think when you sell anything, there has to be a trust.

“If they trust me they will follow my lead.

“The No. 1 reason to watch TV news is the weather.

Walk into Condo Shop’s office in the Aria on Locust off 15th Street, and the energy hits you as if you had stuck your finger in a hot socket.

It’s a narrow former townhouse with two floors, on which a dozen or so Millennials mix it up with a couple of Baby Boomers and they bounce ideas off one another — on the stairs, as they are getting coffee or answering the phones — in a manner that has changed the way real estate is bought, sold and rented in the Philly area.

And at the heart of the energy and redefinition is Gaurav Gambhir, who is Condo Shop’s executive director/owner. 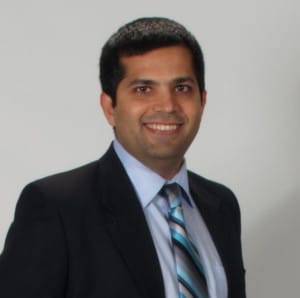 Gambhir (left) studied computer science and math at Drexel, got his first job at Unisys, left after six months to join Sant Properties in Huntingdon Valley as an IT person, and he discovered that real estate fascinated him.

“It was a great eight years,” he says of his Sant stint, in which he managed 3 million feet of commercial, industrial and residential properties.

He then spent “two or three weeks” at Keller-Williams before he realized working as an agent in a big firm wasn’t for him:

So in 2008 he started Mega Realty, a residential brokerage company.

And that’s where he began to transform his vision into reality.

Most real estate brokers get little support from management, who allow them to act as free agents, not members of a team with full support from the top.

“Most real estate companies don’t provide agents what we provide,” Gambhir, who is 36, says as he sits across from a conference table with his eye on his e-mail.

“We provide administrative support and leads — the buyer leads are the most important:

“If you have a problem at 10 o’clock on a Saturday night, I’m available.”

Within two years of starting Mega Realty, Gambhir had 60 agents and a second office in Old City. 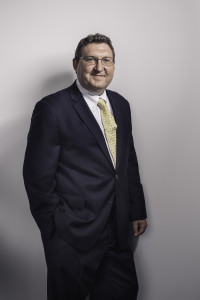 “Then, through a friend,” he says, “I met Ben Oller (left) of Condo Shop, whose dad Richard had started the business in the 1960s. Ben wanted to sell and he offered to hire me, but I wanted equity and now we are 50-50 partners.”

Gambhir and Oller work together well.

“Ben sets up a meeting and I close the deal,” Gambhir says as he slides the fingers of his hands together creating the image of a glove.

“It’s a yin and yang relationship, and it works well — we are building something here.”

The Condo Shop is a collection of real estate boutiques where we are proud of our intimate knowledge of Philadelphia’s historic and award-winning neighborhoods.

It only seems as if Condo Shop has a piece of every building that is hot to rent or sell in Philly.

“We sold out Aria in 2010,” Gambhir says without bragging about the building in which his office is located. “There was a sheriff’s sale of 60 units and they were sold in 18 months.”

Same story with 1352, a brand new loft building at Broad and South.

Condo Shop aggressively markets its buildings — the balloons and arrow-pointing kids you see at 22nd and the Parkway are for Park Towne Place Premier, which recently underwent a $300 million renovation by its owner Aimco and has become a hot place for Millennials: the target market for everyone. 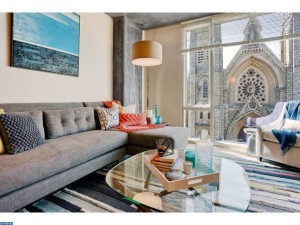 Also the Parkway House at 22nd and the Parkway and 3737 Chestnut (left), a Bozzutto building at Penn.

Condo Shop has a huge and growing list of prospects — anyone who has ever looked for an apartment or bought a home — that it emails regularly with specials and discounted offers.

It also utilizes other sites — including TCSHomes, Condo.com, GoldOller, TCS Management, RentPhilly.com — to grow its business and its reach.

Every real estate company says it offers “full service” to its customers.

But Gambhir has refined it to a science — a true one-stop shop:

“If you rent or buy from us,” he says, “we handle contacting PECO, the phone company, the water department and Comcast!”

Anyone who has ever gone through the paces of moving into a new apartment or home know how time-consuming and nettlesome those contacts can be — especially Comcast.

Gambhir likes to says that his business “ranged from the $600 a month rental to the $6 million home buyer — with the old Gatsby estate in Sands Point, L. I., topping off at $16 million.

“And if you serve them right,”” Gambhir emphasizes, “they’re clients for life!”

And, as John Bolaris says:

“Our concept is a team — the dream team in real estate!”