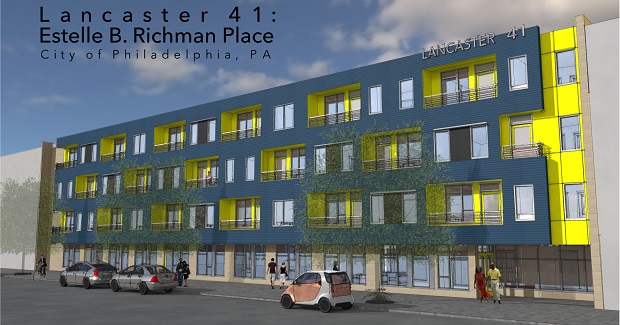 Lancaster Avenue runs through the heart of West Philadelphia’s uppermost neighborhoods, including neighborhoods that are adjacent to Fairmount Park.  It is a busy working-class shopping district, but has some large vacant lots and retail spaces, especially west of 41st Street. New development is occurring on Lancaster Avenue between 34th and 40th Streets, but little new development has been happening west of 40th Street.  A new apartment building is now planned on a couple large vacant lots just west of 41st Street, at 4112 Lancaster Avenue. This new apartment building is being developed by Constellar Corporation and designed by Haley Donovan architects. It is being called Lancaster 41: Estelle B. Richman Place and it will be entirely affordable housing units, which is unusual for a privately developed building.

Lancaster Avenue has much potential for further development.  A new apartment building is being built at the busy intersection of 38th Street and Lancaster and Powelton Avenues.  Several buildings are being renovated along that stretch of Lancaster, too. New businesses are opening up on blocks that had much vacancy and now this new development west of 40th Street continues the progress further west.  As the area develops, there will be a need for affordable housing in this area of West Philadelphia, especially as neighborhoods along Fairmount Park continue to develop, so this large new affordable apartment building provides much of that new affordable housing as it revitalizes this stretch of Lancaster Avenue.