Liberty on the River: Mega Project Along the South Philadelphia Waterfront & Columbus Blvd 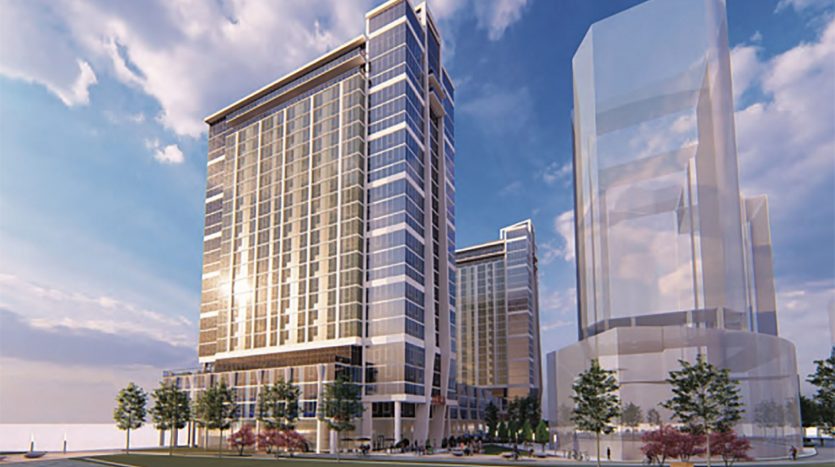 Liberty on the River

The Delaware River waterfront in South Philadelphia has been a historically industrial port area of the city.  Over the years, most of that industry and port activity has declined at the portion of the waterfront near Washington Avenue, where shipping piers and a busy immigration station once stood in the nineteenth and twentieth centuries.  In recent years, this once industrial zone has been experiencing new development, including shopping centers and now townhouses. Certain properties remained undeveloped and are starting to get the attention of developers, some of whom are proposing large new mixed-use developments.  The largest development to be proposed in this section of the Delaware waterfront is a megaproject called “Liberty on the River”, off of Columbus Boulevard at Reed Street. This development would include a total of more than 2,000 residential units in nine residential towers on land and on piers extending into the river, a hotel tower, and thousands of square feet of retail and open space.  This big new three million square foot development is being built by K4 Philadelphia LLC and designed by Barton Partners. The first phase of the megaproject has recently been designed and will begin construction soon.

This first phase will be technically one large building, known as Building One, with three towers on a podium that will include retail, amenities, residential units, and parking.  The first floor will have more than 21,000 square feet of retail space in an arcade facing a large landscaped and furnished courtyard, which will be in the middle of the new neighborhood.  The retail may be largely a market. Above the first floor will be three floors of mechanical parking, with 426 spaces and 252 bicycle parking spaces, and several residential units in front of the parking garage facing the courtyard.  Above the podium will be three 23-story towers with most of Building One’s 729 total rental units. The units will mostly be one-bedroom units, but the corner units will be two-bedroom units. Some of the upper floor apartments will be bi-level units with balcony terraces.  The roof of the podium and the floor right above the podium will have Building One’s many amenities, which will include a large fitness center and an additional yoga room, two outdoor pools, two outdoor lounges, and an additional social deck terrace. The courtyard and the outdoor public space will be built in its entirety in the first phase.  The courtyard will have access to the river and the river trail. A drive aisle corresponding to Wharton Street will be built to connect to future phases of construction. The exterior of the towers and podium will be blue and white metal panels, some in vertical patterns, and a curtain wall of blue, green, and gray glass windows.

This new mega-development would be a game changer for the South Philadelphia waterfront.  In addition to Liberty on the River, several other new developments are being built in the neighborhood.  To the south, Tower Development is building a new neighborhood of townhouses and apartment buildings; with some retail along Columbus Boulevard, a new high-rise apartment building is planned for Pier 34 to the north, new townhouses were recently built at Columbus and Catharine Street, and across Columbus from Liberty on the River a strip mall is being largely rebuilt as mid-rise apartment buildings with new retail.  All this new development will give South Philadelphia a significant and active waterfront neighborhood, bringing new activity to Columbus Boulevard and new demand for nearby neighborhood shopping districts like South Street and Ninth Street (Italian) Market.

New Apartment Complex at Second Street and Cecil B. Moore Avenue Adds More Housing & Retail to the Upper Part of South Kensington
New Park on Camden Waterfront will be a Focal Point for the City’s Waterfront Community