LOVE Park is Back 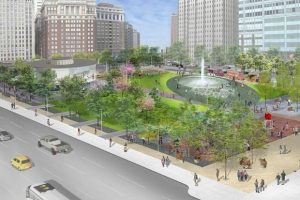 LOVE Park, also known as John F. Kennedy Plaza, is an important gathering spot in Center City.  Located at the foot of the Ben Franklin Parkway at 15th Street and JFK Boulevard, it was once a vacant lot until an underground parking garage was built at the site in the 1960s.  When the underground garage was completed, city officials thought it would be a good idea to put a park on top and name it after the late President Kennedy. The park used a lot of granite and had walls on most sides, since the site is on an incline, and had a large fountain in the middle with a jet that shot up a couple dozen feet into the air.  The city’s planners put Philadelphia’s official Visitor Center in the southwest corner of the park, over the one section that is not built over the parking garage, and in 1976 the iconic LOVE sculpture, by artist Robert Indiana, was installed at the southeast corner, across from City Hall. After a while, people started referring to JFK Plaza as LOVE Park because of the familiar LOVE sculpture, a popular spot for photos and selfies, especially among European tourists.  In recent years, LOVE Park has been in need of renovation, especially the parking garage, which needed to replace its roof. The city sold the garage to Interpark, which has rebuilt the roof, and the city’s Department of Parks and Recreation has decided to do an extensive renovation of the park on top. The renovations began in 2016 and were recently completed, except for the former Visitor Center, with an opening celebration on May 30.

The renovated LOVE Park was designed by Hargreaves Associates and Kieran Timberlake.  The renovation sought to embody several principles, including better access to the surrounding streets and neighborhoods by removing most of the exterior walls, having more green space, facilitating gathering, connecting better to the Parkway, and renovating the former Visitor Center.  The renovated park has several brick plazas with modern benches, more lawn space and landscaping, and several more trees than the original park. The LOVE sculpture has been repainted in its original colors of red, green, and indigo, and put on a new stainless steel pedestal. The large fountain has been replaced with a gray granite plaza, which has a new fountain that has a large jet in the middle and smaller jets around it.  The new fountain, also, has lights underneath each jet which shine onto the jets of water. Next to the fountain plaza is a walkway with ping pong tables. On the south side is a plaza with tables, next to a reserved space on the street for food trucks. Part of that plaza has elongated stairs for sitting. The former Visitor Center will be renovated into a cafe, which will likely have some tourist info, especially for Fairmount Park and the Parkway.

The renovation of LOVE Park is one of the most significant renovations of a public space in Philadelphia.  Since it’s an important gathering place, and is used for the city’s Christmas Market, it is a very prominent, centrally-located public space.  The renovation has made it more accessible and provides more spaces for planned activities and events. It joins other important renovated public spaces nearby, such as the rebuilt Dilworth Park, the renovated Sister Cities Park, the small renovated Cret Park and Cret Cafe, and the renovated underground concourses under City Hall and soon to be renovated City Hall subway and trolley stations.