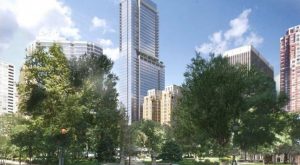 “The sky’s the limit at 1911 Walnut Street, at least according to Southern Land Company. The development group presented preliminary plans for the vacant lot, which sits across the street from Rittenhouse Square Park, to the Planning Commission on Tuesday. Its design makes a number of assumptions, admitted Neil Sklaroff, a lawyer representing the development group.

First, the group authorized its architects, Solomon Cordwell Buenz, to design a 599-foot tower with a floor-area ratio (FAR) that wouldn’t fit into the site’s CMX-4 zoning. The group is hoping to get the site rezoned to CMX-5, the most permissive zoning classification in the city. Currently, there are no sites south of Market Street and west of 19th zoned CMX-5. The Planning Commission’s Central District Plan doesn’t recommend any changes for the property at 1911 Walnut Street.

Council President Darrell Clarke’s office, which represents the area, said on Wednesday that a rezoning bill wouldn’t be introduced “as of now,” while the developers meet with neighborhood groups.”

Read the full article at PlanPhilly.com. 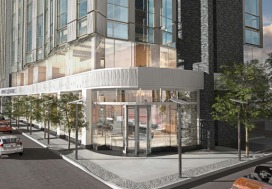 New Luxury Hotel & Apartment Building Will Rise on the Avenue of the Arts
If There’s Snow, We May As Well Sled