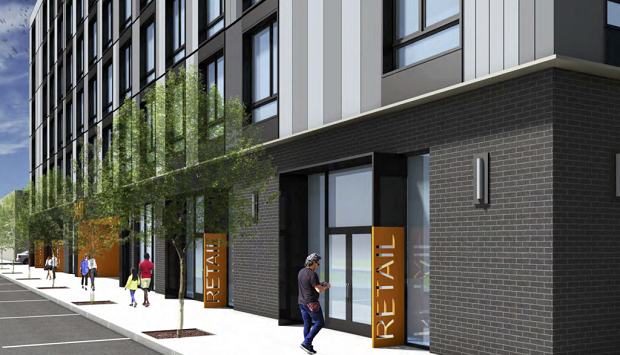 Allegheny West is a neighborhood between Strawberry Mansion and East Falls, just east of Fairmount Park.  The neighborhood is famous for being the former home of Tasty Baking Company and the Budd Company, and still has the headquarters of Pep Boys.

Over the years, the major industrial sites became vacant and some of them are now being redeveloped with new office space, retail, and some new industry.  New housing is starting to be built in the neighborhood, too, such as on Clearfield Street. A small industrial area off of Hunting Park Avenue is starting to be redeveloped with some new housing.  One of the sites being redeveloped is at 3417 West Indiana Avenue, at 34th Street and Indiana Avenue. That site is currently a vacant lot surrounded mostly by industrial buildings. Developer Main Street Development is planning to build a large apartment building at the site.  This new apartment building is being designed by M Architects and Ruggiero & Plante.

The new apartment building at 3417 West Indiana Avenue will be seven stories tall and will have 176 rental apartment units, including some micro units.  The ground floor will have 20,000 square feet of retail, including a fresh food market. A second floor courtyard will be in the middle of the U-shaped building, and will have stairs leading down to an outdoor pool and dog park.  The dog park may be open to the neighborhood for public use, but the pool will be for residents only. A fitness center will be on the first floor, underneath the courtyard. A biowall will be on the back wall where the stairs from the courtyard to the pool and dog park will be.  The rest of the building’s exterior will have metal panels, including some bright yellow panels, floor to ceiling windows, and some brick on the lower level with vertical metal signage for the retail businesses. The seventh floor will be setback from the edge and will have dark brick.  The sixth floor will have a “sky lobby” community room, with floor to ceiling windows and great views of Center City, situated high above the main entrance and residential lobby on the Indiana Avenue side. There will be a green roof and roof terrace, as well. Underground will be 74 parking spaces, with four ADA accessible spaces and four electric vehicle spaces.  The building will, also, have 64 bicycle parking spaces.