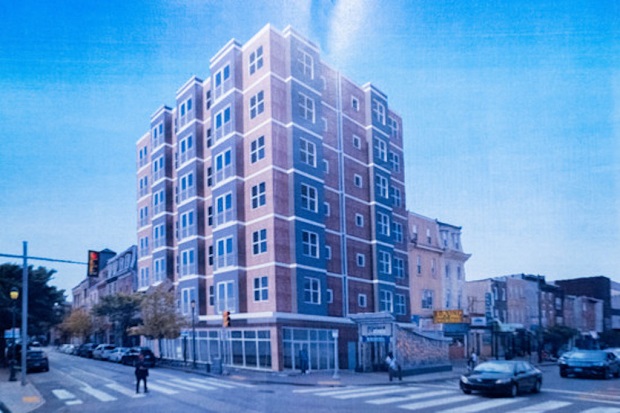 The busy intersection at 40th and Market Streets, in West Philadelphia, is seeing new development nowadays.  Like much of that stretch of Market Street connecting the heart of University City to the heart of West Philadelphia, 40th and Market Streets is seeing new construction.  The new construction at that intersection is just residential for now. A tall, thin apartment building is proposed for the northwest corner of 40th and Market, replacing a former convenience store, and another, shorter but larger building is proposed for the southwest corner of the intersection.  This new apartment building is being built by Fastar, Inc. and designed by Joseph Catelli Architect, Inc. It is expected to break ground and begin construction soon.

The new apartment building at 4000 Market Street will be seven stories tall and have 42 rental units.  The building will be built on three properties, including 4002 and 4004 Market Street. A small eatery at 4000 Market has already been closed and demolished, and the buildings on 4002 and 4004 will be demolished for this new building.  The building will have 36 one-bedroom units and six two-bedroom units. The first floor will have a 3,700 square foot commercial retail space at the corner of 40th and Market. The developers are hoping to put a restaurant in that space.  The building will have a small courtyard, as well. There will be a common laundry room in the building. The exterior will have red brick, and window bays with metal panels and Juliet balconies.

This new building will be attractive to the many students who attend the neighboring universities, but could also be popular with workers in University City and Center City.  There is a subway station for the Market/Frankford line at the 40th and Market intersection and an Indego bike share station across the street, so there is easy access to the rest of University City, Center City, and all the jobs in those important parts of Philadelphia.  The Market/Frankford line connects the new tenants to fun things to do in Center City, Northern Liberties, Fishtown, and 69th Street in downtown Upper Darby, and also connects to the Broad Street line, which can take the building’s residents to the South Philadelphia Sports Complex, the Navy Yard Business Center, and Temple University.  This part of Market Street is seeing other important developments, including 3.0 University Place, an office building at 41st and Market, the UCity Square office and research district between 34th and 38th Streets along Market, and the renovation of the former Provident Mutual Life Building into a medical campus at 46th and Market. The West Park highrise housing project at 43rd and Market is slated to be partially sold to private developers or a nearby university, or both, and two small apartment buildings are about to be built across from West Park on Market.  The busy intersection at 40th and Market Streets was inevitably going to see new development and the new apartment building at 4000 Market Street will be a noteworthy part of that redevelopment.