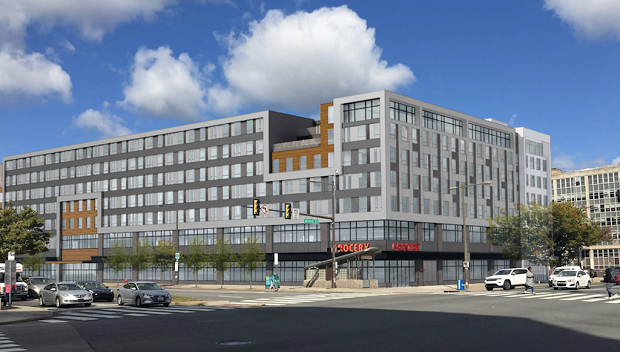 North Broad Street has been seeing significant new development in recent years.  New apartment buildings and renovations of older buildings, such as the Divine Lorraine Hotel Apartments and the Metropolitan Opera House, are remaking a once drab section of this important street.  Despite all this new development, there are several sites that were waiting for new, larger development. One such site is at the northwestern corner of Broad and Spring Garden Streets at 510 North Broad Street, on what is now a large surface parking lot and one small row home, between Broad and 15th Streets, and Spring Garden Street to Brandywine Street.  A new mixed-use building is being developed by Alterra Property Group and designed by JKRP. It will fit in nicely with a slew of new, and planned, residential buildings on the stretch of North Broad Street that is just north of Center City and the Pennsylvania Convention Center.

The new building at 510 North Broad Street will be a block long and seven stories high. It will have 413 rental apartment units and a large retail space on most of the first floor, which the developers would like to rent out to a supermarket.  The apartments on the north and south sides will be studio and one-bedroom units and the apartments on the east and west sides will be two and three-bedroom units. A second floor courtyard will be in the middle of the building. The second floor will have a 64,000 square foot office or retail space surrounding the courtyard.  Underground will be two levels of parking, with 283 parking spaces, and there will be 207 bicycle parking spaces in the building. The seventh floor will have amenities for the residents, including a fitness center and a game room. Setback notches at three of the corners will allow for upper floor terraces. The roof will have a large roof deck and a running track.  The exterior will have metal panels; some in a “ribbon pattern”, wood composite, and masonry on the first floor. The residential entrance will be at the corner of Broad and Brandywine and will have white metal panels running up and down that corner of the building.

North Broad Street will continue to see this kind of development.  At least three other apartment buildings are planned for the blocks of Broad Street at or near the intersection of Broad and Spring Garden.  The former Inquirer Building is being renovated into the new headquarters of the Philadelphia Police Department and a former rail line connected to Noble Street, just to the east of Broad Street, has been converted into the first phase of the new Rail Park.  Some completed developments nearby include the Hanover North Broad apartment buildings, the first phase of The Hamilton apartments on 15th Street, the Stable Lofts apartments a bit further north on Broad, and the residential conversion of the former Independence Press building at 11th and Spring Garden Streets.  Some projects under construction nearby include the Heid Building on 13th Street and the 1300 Fairmount apartment building at 13th Street and Fairmount Avenue. As North Broad Street, and adjacent neighborhoods, continue to see new development then Center City will extend into North Philadelphia.

The data relating to real estate for sale on this website appears in part through the BRIGHT Internet Data Exchange program, a voluntary cooperative exchange of property listing data between licensed real estate brokerage firms in which The Condo Shop participates, and is provided by BRIGHT through a licensing agreement. The information provided by this website is for the personal, non-commercial use of consumers and may not be used for any purpose other than to identify prospective properties consumers may be interested in purchasing. Real estate listings held by brokerage firms other than The Condo Shop are marked with the IDX icon and detailed information about each listing includes the name of the listing broker.
2020 BRIGHT, All Rights Reserved. Information Deemed Reliable But Not Guaranteed. Some properties which appear for sale on this website may no longer be available because they are under contract, have Closed or are no longer being offered for sale.
Data last updated: 10/20/20 6:00 AM PDT