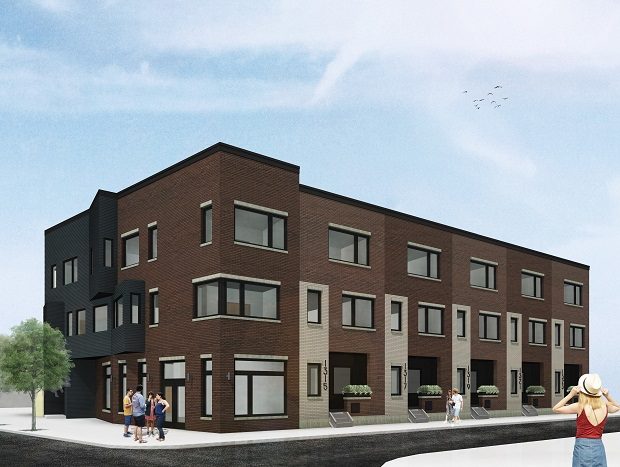 The lower Schuylkill River has traditionally been a major industrial corridor, but much of that industry has left the area.  As that has happened, city government and the Schuylkill River Development Corporation have slowly been converting parts of the river banks on the lower Schuylkill into a trail and parkland.  The new trail is making the area popular for new development, some of it likely will replace the industrial sites there and some of it will be built on vacant lots where there were once rowhomes.  The area below Grays Ferry Avenue has a few blocks of rowhomes, separate from the nearby Grays Ferry neighborhood. This small residential area is sometimes referred to as “Forgotten Bottom”, because it is hidden a bit from Grays Ferry Avenue by industrial buildings.  Developer Emerald Properties is planning to soon build a mixed-use apartment and retail building on a vacant lot at 1319 Schuylkill Avenue, just a short walk from one of the entry points to the river trail.

This new development is being designed by KJO Architects.  The development will have five three-story buildings along Earp Street, which will each have two units.  The first floor units will have one bedroom and access to the backyard. The second and third floor will have another unit, with three bedrooms each and access to a rooftop deck.  The corner building, at Schuylkill Avenue and Earp Street, will have a first floor retail space which is still available for rent to the right business, and two units on each floor above.  The development will have a total of twelve rental units. The exterior will have varying dark brick and angled bay windows in the building facing Schuylkill Avenue. The front of the duplex buildings on Earp Street will have a little front porch with stone planters.

Neighborhoods along the lower Schuylkill River, such as Grays Ferry, will likely continue to see such development as the Schuylkill River trail continues to expand.  The former industrial land is being eyed for high tech office parks by the Philadelphia Industrial Development Corporation (the former Dupont Marshall Labs, on the northern side of Grays Ferry Avenue, was already converted to the Pennovation Center research center and business incubator by the University of Pennsylvania) and more residential development is likely on the waterfront and in the neighborhoods.  This development in the Forgotten Bottom section of Grays Ferry is a part of that continued revitalization of the former industrial area.