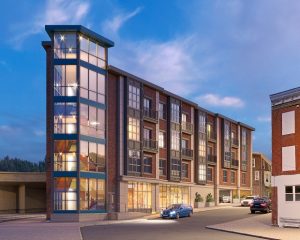 The Wissahickon regional rail train station runs through East Falls and near Manayunk.  The surrounding area is sometimes known as Wissahickon, because the Wissahickon Creek runs into the Schuylkill River there.  The area, also, has a bus station off of Ridge Avenue where several routes converge.  So, the area is a perfect location for transit-oriented development, in which dense residential development is built near public transit stations and hubs.  Now, developer Rock Development and architecture firm Continuum Architecture are building and designing an apartment building next to the Wissahickon regional rail train station that will take advantage of the public transit access in Wissahickon.

The new building will be at 5102 Rochelle Avenue, next to the regional rail line, on a triangular shaped lot.  The site currently has an auto repair shop on it.  It will be four stories tall and have thirty rental units.  The first floor will have retail spaces and fourteen parking spaces.  The parking will include a car share space or two and bicycle storage space.  The exterior will have brick and cast stone and large windows, some in bays and some with Juliet balconies.  One end will have a large glass stair tower.

East Falls and Manayunk have been seeing new development in recent years.  Several new apartment buildings are being built along the waterfront and the Manayunk Canal.  Ridge Avenue is, also, seeing new development throughout East Falls and this new building is another addition that takes advantage of the Schuylkill waterfront and access to public transit.