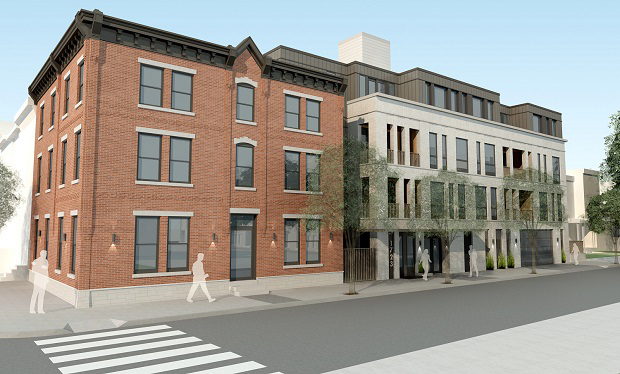 Francisville is a unique neighborhood north of Center City.  It includes several small streets that are parallel and perpendicular to Ridge Avenue, and so it has many wedge-shaped blocks amidst its thin streets.  Francisville, also, has many old buildings and some new construction, because there were many vacant lots there until recently. As development has boomed in Francisville, available development sites have decreased, including along once-barren Ridge Avenue.  One site in the neighborhood that has remained vacant is a small apartment building at Francis and Perkiomen Streets, at 1723 Francis Street. That site is actually five properties recently combined by Loonstyn Properties. Loonstyn plans to demolish the back wing of the building and build a new wing on the site of that demolished wing and a couple vacant lots.  This new apartment project is being designed by Gnome Architects.

The development at 1723 Francis Street will have 24 rental units.  Six of the units will be in the existing three-story, red brick building at the corner of Francis and Perkiomen Streets.  A new wing will be built next to, and attached to, the building on the corner. This new wing will have eighteen additional units in a four-story building.  The apartments will have nine foot ceilings. The first floor will have eighteen parking spaces, including an ADA-accessible space. There will be sixteen bicycle parking spaces.  The new wing will have an elevator and a rooftop deck. The exterior of the new wing will be mostly white brick, with dark metal panels on the fourth floor. The fourth floor will be recessed, creating a terrace, and there will be recessed balconies on the lower floors.  Four new street trees will be planted on the sidewalks of Francis and Perkiomen Streets. Landscaping will be all along the drive aisle and along the sides of the parking lot, which may also have fencing to block the view from the neighbors’ yards.

Development will continue in Francisville on whatever vacant lots remain in the neighborhood, such as a large one along 19th Street just south of Girard Avenue.  Ridge Avenue has seen so much development, as it had numerous vacant properties. Many of the new buildings on Ridge Avenue are four and five story buildings with retail spaces at the ground level, and these retail spaces are finally starting to fill up with new neighborhood businesses.  The Metropolitan Opera House is on the Broad Street side of Francisville and its renovation is a dramatic addition to the neighborhood and all of North Philadelphia, making Francisville more of a destination for entertainment and even tourism, which makes Ridge Avenue’s retail revival more imminent.  New residential development in Francisville will continue because of these improvements. This development will save some of Francisville’s historic gems and bring new, modern designs to the neighborhood, as well.