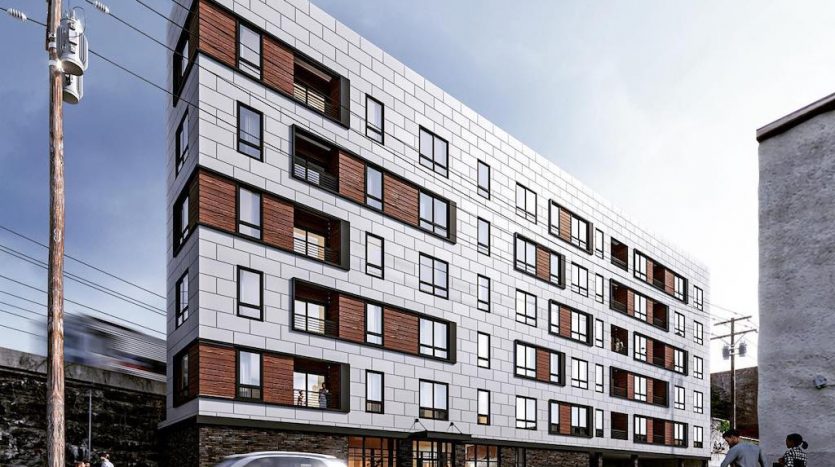 The neighborhoods around Temple University have been seeing major development for quite some time. Some of these neighborhoods had much vacant land and the redevelopment was often started by new, better quality affordable housing developments built by city government and community groups. The new construction has tended to happen in areas between Temple’s main campus and Center City and once-blighted neighborhoods just to the east and west of main campus, which have now become popular with students. Now, private development is starting to move to neighborhoods to the north of Temple’s main campus, including the Hartranft neighborhood just to the northeast of the campus. For years Hartranft had been affected by a community group known as The Village of Arts and Humanities, which would clean up the vacant lots and parks and put unique artwork in them. Some private developers have now taken notice and are building apartment buildings in the Hartranft neighborhood. Once such building is being planned for a nearly triangular vacant lot next to a regional rail line, at the intersection of 10th Street and Susquehanna Avenue.

This new apartment building is being built by Finch and designed by Design Blendz Architecture. It will be six stories tall and have 35 rental units. It will have a fitness center and a lounge in the residential lobby. There will be fourteen parking spaces in the building, including one ADA-accessible parking space. There will, also, be 21 bicycle parking spaces. The exterior of the building will have wood composite and silver metal panels, with stone at the first-floor level. Many units will have balconies.

Hartranft is coming along. Just a stone’s throw from this new apartment building is another apartment complex under construction at 10th and Diamond Streets. Another interesting complex of apartments and business space is being built at the intersection of 10th Street and Susquehanna Avenue, too. This additional new apartment building next to the SEPTA tracks is a further sign of more development to come.