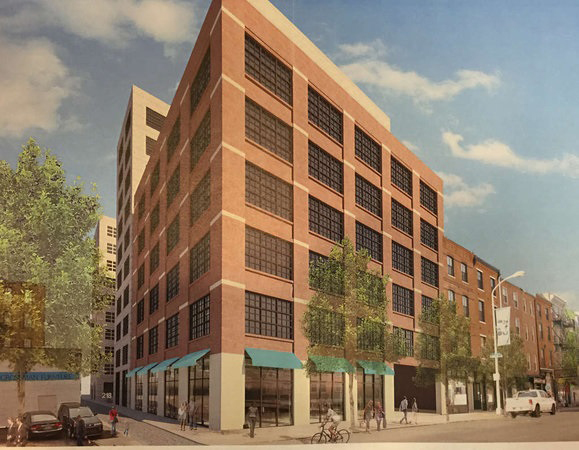 Old City is seeing much new development in recent years, in the most historic square mile in the United States.  In addition to being such a historic neighborhood and a premier art gallery district, with tons of trendy dining and shopping, Old City has become a premier residential neighborhood.  Most of the new development has been in renovated buildings dating back to the eighteenth and early nineteenth centuries, but some of it is in new construction. A few properties were vacant or had parking lots that seemed like prime sites for new development.  One such property is at 218 Arch Street, next to a small Belgian-block alleyway known as “Little Boy’s Court”, on the same block as the Betsy Ross House. This site was a parking lot for many years and has been redeveloped into a large apartment building by PMC Property Group.  This new apartment building was designed by Varenhorst Architects. The site had to be excavated by archaeologists as it was discovered that it had been the site of an 18th century burial ground, which eventually had small industrial buildings built over it, before they were eventually demolished.  All the historic remains were removed and interred at another burial ground.

The new apartment building at 218 Arch Street is six stories on Arch Street and ten stories behind.  It has 116 rental units, mostly one and two bedroom units. There is an available studio, which is 366 square feet, renting for $1,585 per month.  The standard one-bedroom is 650 square feet and rents for $2,005 per month, but another available one-bedroom is 738 square feet and renting for $2,280 per month.  The units have hardwood floors, tile shower stalls, Bosch washers and dryers, granite kitchen countertops, and GE stainless steel oven/ranges, microwaves, refrigerators, and dishwashers.  The building has a lounge with a large TV, a billiard table, chairs, and a dining table. A plaza at the entrance on Little Boy’s Court has metal chairs and benches. The building has a business center and free wifi.  There is a fitness center with Peloton bikes. There is, also, a package room. A rooftop deck is on top. Parking is available underground for a fee of $325 per month.

The new apartment complex at 218 Arch Street is part of a recent building boom of new residential buildings in Old City, which includes The National, Bridge on Race, One Water Street, and The View at Old City.  Another new apartment building is planned at Second and Race Streets. Old City is seeing many new developments, such as the Cherry Street Pier on the waterfront, the new upscale food hall at The Bourse building, the Fringe Arts building, and the Museum of the American Revolution.  Nearby, also, is the Fashion District shopping mall, the East Market development of stores and eateries, and Franklin Square Park. The new apartment building at 218 Arch Street is in the mix of all these many things that Old City has to offer.