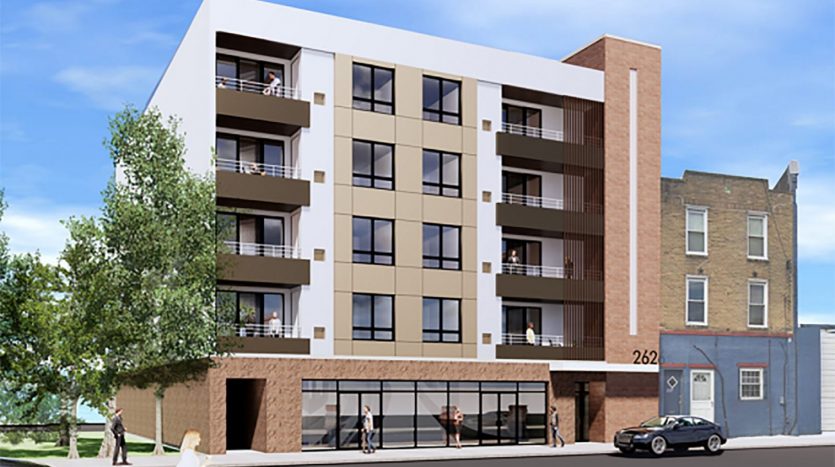 South and East Kensington and Fishtown have seen so much development that they have little available land to build on.  One of the busiest areas for development has been on Frankford Avenue, where dozens of new and renovated buildings provide new apartments, retail, townhouses, and condos for these neighborhoods.  That kind of development had stopped at the blocks below Frankford Avenue, where several vacant properties were located. A new apartment building is replacing some of those vacant properties on Frankford, just south of Lehigh Avenue and the lower boundary of central Kensington.  This new apartment building is being called, “Frankford Flats” and it is being developed by Gotham Bedrock Real Estate Partners and designed by Abitare Design Studio. Frankford Flats will be located at 2620 to 2626 Frankford Avenue, replacing a couple vacant lots and a couple small rowhomes.

Frankford Flats will have twenty rental units in a five story building.  The first floor will have a 2,500 square foot retail space facing Frankford Avenue, with ten foot high ceilings.  The first floor will, also, have a small lobby facing Frankford. The facade will have wide balconies in front, with large windows and sliding doors, white; light brown; and dark brown metal panels, red brick, and masonry.  There will be vertical screens over the balconies on the right side. There will be a bicycle room in the rear of the building and a rear yard that will be twenty feet deep. This project received approval from the East Kensington Neighborhood Association and the Zoning Board of Adjustment for a height variance.  The vacant buildings have already been demolished and work is underway on this new building.