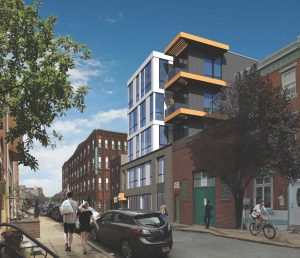 North 3rd Street runs through several neighborhoods: Old City, Northern Liberties, and South Kensington to name a few.  It has been cleverly dubbed “Nerd Street”, because of the preponderance of internet companies along it and the similarity of “N. 3rd” to the word “nerd”.  Residents and business owners take pride in the nickname, seeing the term nerd as a compliment for intelligent computer and internet developers and entrepreneurs.  New development has continued along the street, including several recent modern townhomes and apartment buildings just south of Girard Avenue, where there used to be much vacant land.  One such residential development is at 1143 N. 3rd Street, which will replace a small garage at 3rd and Bodine Streets.

1143 N. 3rd Street is being developed by Maximum Development and designed by JKRP Architects. It will have 26 rental units.  Two of those units, on the first floor, will be live/work units, with loft style spaces for artists’ creative work.  This adds a bit to the creative economy of Northern Liberties, and relates to the internet and software creativity of N. 3rd Street.  The building will have eight parking spaces inside, accessible from Bodine Street.  The building will, also, have bicycle parking.  It will be five stories and 60 feet tall.  It will have a modern design with large windows, colorful metal panels, and brick on the first two stories.  The upper three stories will have large decks at the corner, facing south and east.  The developers received a zoning variance from the Zoning Board of Adjustment this month, necessary because they do not plan as much open space as the zoning code requires, so they can begin construction soon.