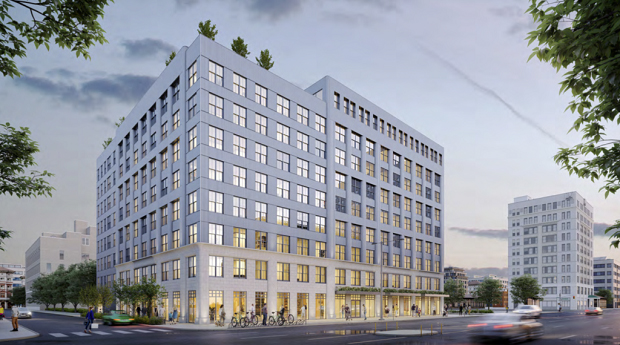 North Broad Street has been seeing significant new development in recent years.  New apartment buildings and renovations of older buildings, such as the Divine Lorraine Hotel Apartments and the Metropolitan Opera House, are remaking a once drab section of this important street.  Despite all this new development, there are several sites that were waiting for new, larger development. One such site is just north of Broad and Spring Garden Streets at 545 North Broad Street, on what is now two vacant retail buildings that used to have a sandwich shop and a tire store, between Brandywine and Green Streets.  A new building is being developed by Elk Street Management and designed by Canno Design. It will fit in nicely with a slew of new, and planned, residential buildings on the stretch of North Broad Street that is just north of Center City and the Pennsylvania Convention Center.

This new apartment building at 545 North Broad Street will be nine stories, and almost 100 feet, tall and have 108 rental apartment units.  The apartments will be 91 two-bedroom units and seventeen three-bedroom units. It will have a large retail space on Broad Street of about 11,000 square feet, with a connecting courtyard terrace in the back.  The second floor will have an amenity space for the residents. The ninth floor will be a partial floor on the south side of the building, with amenity space for the residents leading to a large green roof and roof deck above the eighth floor.  On top of the ninth floor will be an additional green roof and roof deck. One of the most distinctive features of this new building will be the facade. The first and second floor facades will have cast stone, with protruding sections that mimic columns and a cornice at the top of the second floor.  Above the stone of the first and second floors will be corrugated metal panels, some of it curved to mimic columns and some indented between the windows similar to art deco window treatments. A green canopy will be over the retail entrance on Broad Street and the residential entrance on Green Street, with plantings on top of the canopy.  Ground lighting will accentuate the column-like features of the stone facade. There will be tree planters on Broad Street. Underground will be 31 parking spaces and 50 bicycle parking spaces will be located off of the residential lobby. The project developers are seeking LEED Silver certification for the building.

North Broad Street will continue to see this kind of development.  At least three other apartment buildings are planned for the blocks of Broad Street at or near the intersection of Broad and Spring Garden.  The former Inquirer Building is being renovated into the new headquarters of the Philadelphia Police Department and a former rail line connected to Noble Street, just to the east of Broad Street, has been converted into the first phase of the new Rail Park.  Some completed developments nearby include the Hanover North Broad apartment buildings, the first phase of The Hamilton apartments on 15th Street, the Stable Lofts apartments a bit further north on Broad, and the residential conversion of the former Independence Press building at 11th and Spring Garden Streets.  Some projects under construction nearby include the Heid Building on 13th Street and the 1300 Fairmount apartment building at 13th Street and Fairmount Avenue. As North Broad Street, and adjacent neighborhoods, continue to see new development then Center City will extend into North Philadelphia.