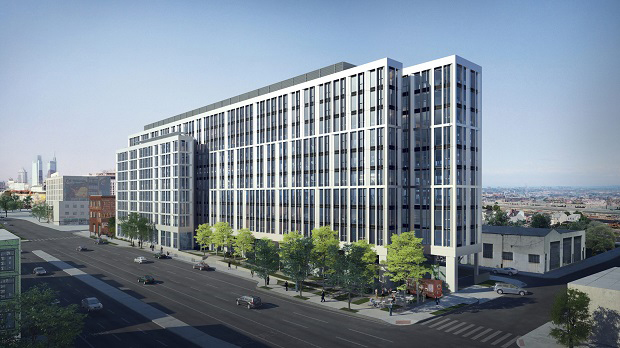 North Delaware Avenue is starting to see major development again.  In the past, a casino was built and Waterfront Square Condominiums had been built, but development slowed down for a while.  Recently, though, development is starting to pick up again with apartment and townhouse developments planned. One large site is at 1130 North Delaware Avenue across from the casino and Penn Treaty Park, and is where an earlier plan to build an apartment building and indoor climbing gym has been replaced with a new plan for an apartment building.  This new plan would be similar to the previous one. It is being built by Streamline Development and designed by Varenhorst. It will replace a large parking lot and a small furniture warehouse at North Delaware Avenue and Marlborough Streets. The historic Edward Corner Rope Manufacturers building, at the corner of North Delaware and Shackamaxon Street, will be renovated into offices for Streamline.

The new building will be ten stories tall and almost an entire block long, along Delaware Avenue.  It will have 244 rental units. A small retail space will eventually be located at the corner at Delaware and Marlborough.  It will have 49 parking spaces on the lower level, accessible by Allen Street on the west side and by Marlborough Street. An additional 102 bicycle parking spaces and two outdoor bike racks will also be on the property.  The residential entrance and lobby will be located on Delaware Avenue and a landscaped, tree-lined plaza will run along most of the rest of the front of the building, in front of the parking garage. The plaza will have benches and tables and artistic panels along the wall.  The exterior of the building will have metal panels and recessed floor-to-ceiling windows. The panels will be in a vertical bands pattern and the exterior will also have irregular fins. An amenity space will be on the rooftop.

North Delaware Avenue is going to continue to see similar development.  Larger plans for multiple and taller high rises are being considered further down the street and several high rise and townhouse developments are happening around Penn’s Landing and on South Columbus Boulevard.  A large new neighborhood of townhouses and apartments is proposed further up on the waterfront and the former PECO Energy station, next to Penn Treaty Park, is about to be renovated into a hotel and event center.  North of that building, a new outdoor concert space is being created to replace the former Festival Pier, which is about to see some of that new high rise development. This new building at 1130 North Delaware Avenue redevelops one of the largest sites in the area and brings much new population to that same area.