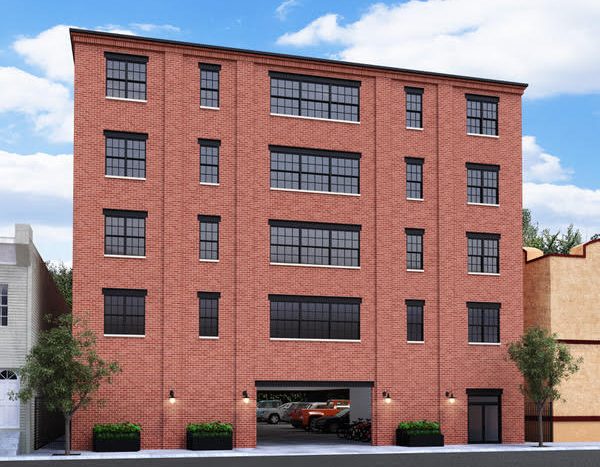 Port Richmond is starting to see the kind of apartment development that is common in nearby Fishtown, Kensington, and Northern Liberties.  While most of the neighborhood along the Delaware River waterfront is made up of traditional row homes, new apartment development has become popular along the partially commercial street of Richmond Street.  Richmond Street has some classic neighborhood businesses and row homes, but recently developers have found the major neighborhood thoroughfare a prime spot for new apartment construction, similar to what’s being built nearby on Girard Avenue and York Street.  A new mid-rise apartment building is now planned for a former auto repair yard at 3045 Richmond Street. This new apartment building is being developed by Fifth Realty and designed by Cadre Design.

The new apartment building at 3045 Richmond Street will have 28 rental units in a five-story building.  There will be sixteen two-bedroom, two-bathroom units and twelve one-bedroom, one-bathroom units. The units will each have walk-in closets.  There will be side yards on either side of the building and a seven-foot rear yard, as well. The facade will have red brick and many windows for a traditional design that is similar to the older row homes of the neighborhood or some of the industrial buildings that are common in, and near, the Port Richmond neighborhood.  The facade will, also, have first-floor lights and planters in front. There will be 22 parking spaces in a garage on the first floor and bicycle parking, as well. The building will have elevators for tenants.

Port Richmond will continue to see this new residential growth, similar to the explosive residential growth and development in nearby neighborhoods like Fishtown, South Kensington, and Northern Liberties.  Port Richmond is about to see its biggest redevelopment in recent times along the Delaware River waterfront, where a large development of apartment buildings and townhouses is planned along the Delaware River trail.  New apartment development is going to be popular in row home neighborhoods like Port Richmond because of ever growing demand throughout North Philadelphia and the River Wards sections of Philadelphia.

25 Philadelphia Virtual Tours: Explore the City of Brotherly Love
How to Take Your Kids on Virtual Rides at Disney Parks Around the World