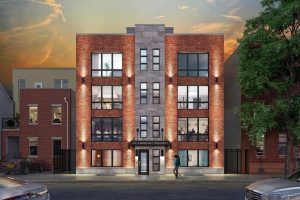 This particular building is being developed by Stamm Development Group, which has been building many of these kinds of developments nearby in Francisville, often replacing vacant lots.  817 North 20th Street is being designed by KCA Design and may be called The Fairmount Greenery. The Fairmount Greenery will have fourteen rental units. The building will be four stories, about the same height as the older townhouses in the neighborhood.  It will have several residential amenities, including a fitness center, a green roof, fourteen bicycle spaces, and tenant storage. There will be no parking for cars. The exterior will have red brick, limestone, lights, and large windows.

The Fairmount Greenery will add another modern building to Fairmount’s and Francisville’s inventory of new buildings, creating an increasingly contrasting mix of new and older architecture.  North 20th Street is experiencing a change in its streetscape and vacancy is filling up with these new buildings.

Learn more about Fairmount and all the neighborhood has to offer. Call 215.692.6636 or email info@thecondoshops.com.