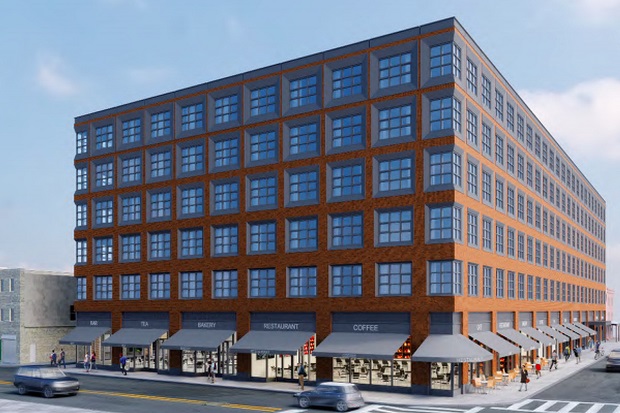 The Ninth Street Market, commonly called the Italian Market, runs along Ninth Street in South Philadelphia from Christian Street south to Wharton Street.  It is an historic indoor/outdoor market bazaar, dating back to the nineteenth century, and is the largest and oldest market of its kind in the United States.  It is normally crowded with shoppers moving in between the stalls of fresh produce, meats, and seafood which attracts people from throughout the city and tourists to the city.  One area of the market has been blighted for a long time. The southeast corner of Ninth Street and Washington Avenue has a small seafood retailer and the rest is largely vacant, where a large vacant warehouse was demolished several years ago.  This blighted site at 1101 South Ninth Street hurts the vitality of this stretch of the market and is now slated to be redeveloped into a large apartment building by Midwood Investment and Development. This new building is being designed by BLT Architects.

This new apartment building will be six stories tall and have 157 rental apartment units.  It will take up the entire 32,000 square foot site, as the existing seafood retailer will move and the building will be demolished.  There will be 16,000 square feet of retail in several spaces along Ninth Street and Washington Avenue, with the intention of creating the kind of small retail businesses that the neighborhood and market are known for.  The retail spaces will have awnings, which could be the kind of metal awnings that the Ninth Street Market has all along Ninth Street over the sidewalk in front of the many older businesses. A courtyard will be in back on Darien Street for the residents.  The building will have 120 underground parking spaces and there will be a bicycle storage room. The roof will have an amenity deck, with indoor and outdoor space for the residents and stunning views of Center City. The exterior will have square factory-style windows and red brick, with metal panels surrounding the windows on the upper floors.