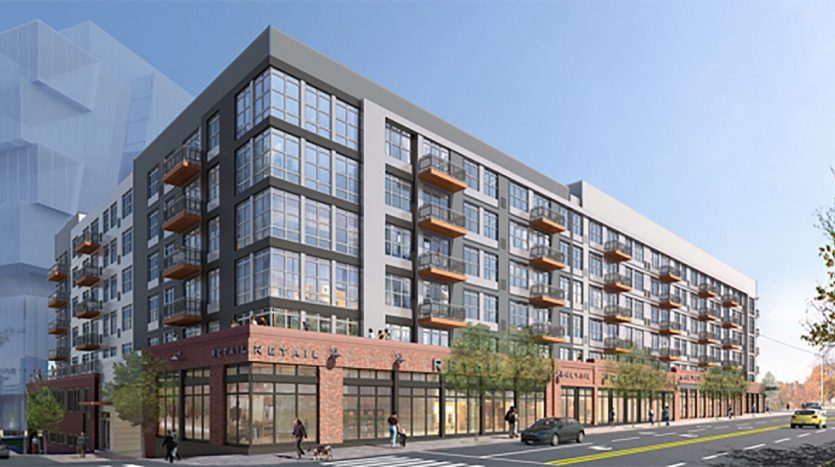 University City is seeing several new developments which are creating new office space for high-tech companies.  Some of this office space is being built at the former site of University City High School and an adjacent middle school.  This new development is going to be called UCity Square and will include several new office buildings, a K-8 public school, and at least two new apartment buildings.  One of those apartment buildings will soon be built at the intersection of Lancaster Avenue, Powelton Avenue, and 37th Street. This new apartment building is being built by GMH Capital Partners and Wexford Scientific Technology and designed by Lessard Design.

The new apartment building at 3700 Lancaster Avenue will be an angled six to seven-story building with 463 rental units.  The units will be studios, one-bedroom, two-bedroom, and three-bedroom units. There will be nearly 14,000 square feet of retail space on the first floor, mostly on Lancaster Avenue.  An outdoor pool and courtyard will be located on the south side above the first floor. The building will have a green roof on top and a small courtyard and bioretention garden in front on Powelton Avenue.  There will be 157 parking spaces underground and a bike storage and repair station for residents at the lower level at 37th Street and Warren Walk. The surrounding sidewalk and Warren Walk will have bluestone pavers, bicycle racks, new street trees, and a bikeshare station.  The exterior will have red brick, large windows, metal panels, balconies, and fiber cement panels.

UCity Square will add a lot to Philadelphia’s economy and a large apartment building at the edge of the district will provide much housing for the future workers and entrepreneurs of that district and University City.  Even workers from Center City could likely live there because of the Route 10 trolley on Lancaster Avenue, which goes to City Hall. The redevelopment of the long vacant lot at 37th Street, Lancaster and Powelton Avenues will create an important addition to the Powelton Village neighborhood and an appropriate transition between the growing business and research district to the south and the low-rise neighborhood north of Lancaster and Powelton.