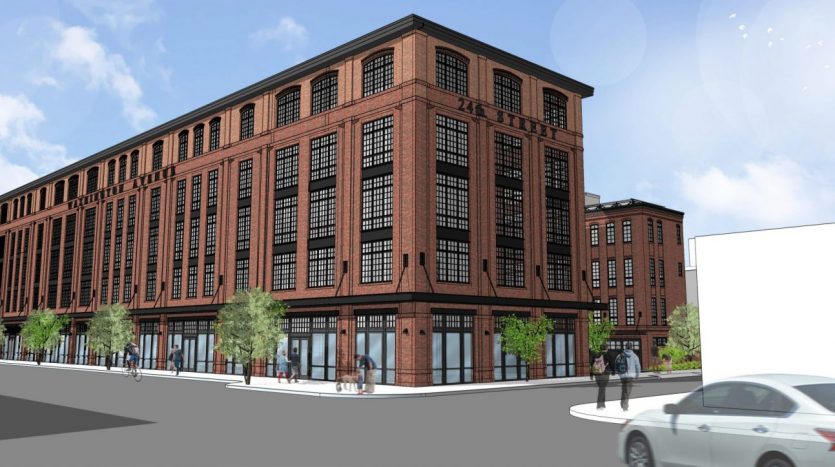 Washington Avenue has a former industrial district running through the neighborhoods of Graduate Hospital, Fitler Square, and Point Breeze.  Over the years, many of the former industrial buildings were reused as warehouses and showrooms for home decor and kitchen and bathroom fixtures, creating a home decor district along Washington Avenue.  As demand for new housing increases in the neighborhoods just to the south of Center City, some of these old warehouses are being demolished for new housing. Some of the old warehouses were already demolished a long time ago and the vacant lots left behind are, also, being replaced with new housing developments. One such long vacant lot is at 24th Street and Washington Avenue, on the north side of Washington Avenue between 24th and 25th Streets. Except for a small auto garage at 25th and Washington, that site has been vacant for decades.  This property is being redeveloped by developers Noah Ostroff and Mickey Murray with a large new apartment and townhouse complex designed by Landmark Architectural Design. This new development will be called Fitler Estates, named after one of the neighborhoods to the north of Washington Avenue.

Fitler Estates will have four buildings with a mix of rental units and homes for sale.  The largest one will be five stories tall and have 28 apartments and almost 15,000 square feet of retail space on Washington Avenue.  A smaller four-story apartment building, with eighteen apartments, will be located behind the large one on Washington Avenue and another four-story apartment building, with 28 apartments, will be located on 25th Street.  Eight large four-story townhouses will be located behind homes on Kimball Street, extending west from 24th Street. There will be a total of 82 housing units. The various buildings will have green roofs and new street trees on Washington Avenue, a stretch of street and sidewalk which currently has almost no street trees.  The exteriors will have brown brick and large, industrial-style windows, including some arched windows on the top floors. Large letters will spell out “Washington Avenue” on the front facade and “24th Street” on the 24th Street side. There will be 38 parking spaces, including in the garages of the townhouses. Ten percent of the rental units will be affordable units, reserved for tenants making 60% of the Area Median Income.