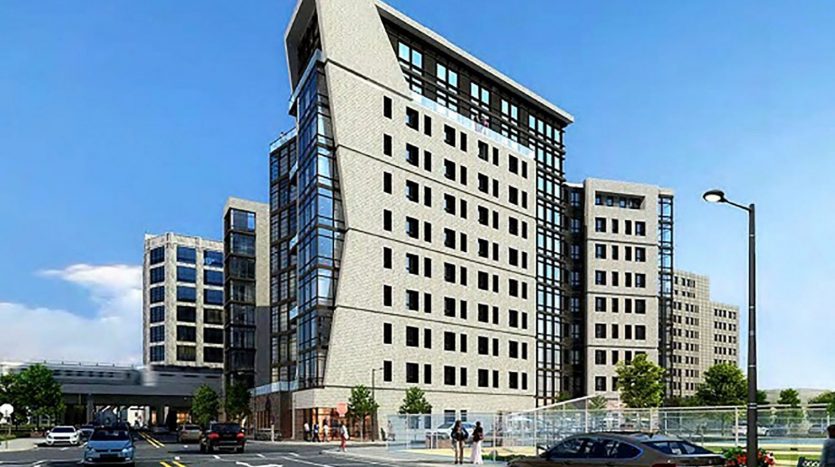 The Poplar neighborhood is east of Broad Street and south of Girard Avenue.  Over the years, it has seen massive redevelopment of the Richard Allen Homes and Cambridge Plaza communities by the Philadelphia Housing Authority. Several developments are underway or planned and are having a large effect on the neighborhood.  Many of these large new developments are redeveloping vacant properties and one of the largest vacant lots in Poplar is between North 8th and North 9th Streets at Poplar Street, next to elevated SEPTA regional rail tracks. This lot has been vacant for a long time and has been recently bought by APOM Holdings to be redeveloped with a very large market-rate apartment complex. This new apartment complex is being designed by Coscia Moos Architects.

This new apartment complex will consist of three large buildings with a total of 475 rental units.  Each of the buildings will be eleven stories tall, with two of them on Poplar Street and another to the north of the 9th Street building.  The two buildings along 9th Street will have a courtyard in between them and a connector bridge above. The first floor of the building facing Poplar Street will have retail spaces totaling almost 6,500 square feet of space.  There will be parking on some of the first floor with a total of 87 spaces for residents and six spaces for the retail. There will also be 152 bicycle parking spaces. The residential lobbies will be at the courtyard. Roof decks will be on top of each building.  The facade will have brick, porcelanosa panels, granite, metal panels, and copper screening over the garage. The windows will be large and angular, with some glass balconies. Small gardens, with shade resistant plants, will be located along 9th Street and a small dog park will be on the 8th Street side.