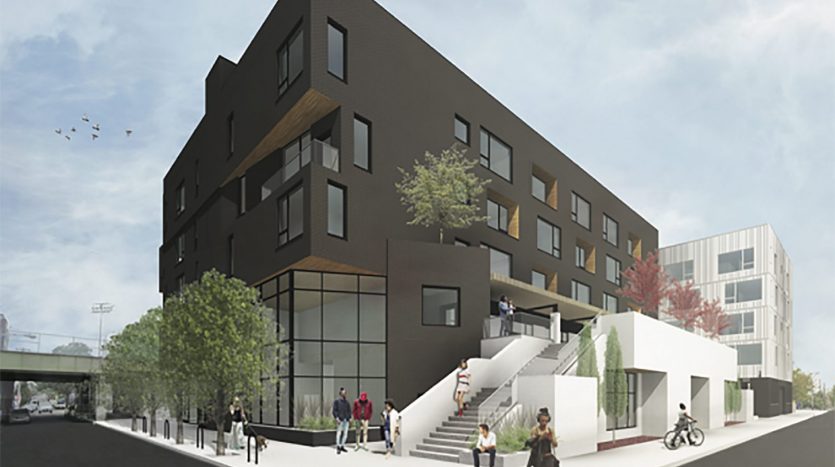 Hartranft is a neighborhood in the middle of North Philadelphia, just northeast of Temple University and the regional rail line.  It has seen little of the new development that is now common in Ludlow, to the south, and in most neighborhoods surrounding Temple University.  It has many vacancies and a unique community group known as the Village of Arts and Humanities, which has filled various vacant lots with unique sculptures and other artwork.  The Village of Arts and Humanities has, also, been renovating vacant houses and providing social services to residents of the Hartranft neighborhood for years. A new development is planned at 10th and Diamond Streets that would redevelop a blighted block mostly used for auto storage, but with some vacant properties, on the boundary of the Ludlow and Hartranft neighborhoods.  This new development at 919 Diamond Street will be an apartment complex a couple blocks north of the Temple regional rail station and just north of the North Philadelphia Choice redevelopment. This new apartment complex is being developed by Mazal Tov Development and designed by KJO Architecture.

This complex will have 99 rental units in two five-story buildings, separated by a landscaped walkway.  The complex will have 56 studio apartments ranging in size from 475 to 575 square feet, 24 one-bedroom units ranging in size from 700 to 900 square feet, and nineteen two-bedroom apartments ranging in size from 900 to 1,200 square feet.  The building along Diamond Street will have 15,600 square feet of commercial retail space on two floors. The second level of retail will open out to a terrace overlooking Delhi Street, connected to a long stairwell down to the street level.  The main entrance for the retail space will be on Diamond Street. There are 30 parking spaces on a surface parking lot to the north, interior bicycle parking, and bike racks on Diamond and Delhi Streets. A pool and terrace will be located on another side of the building and a green roof will be on top of each building.  The exteriors will have charcoal-color brick, metal panels, and wood trim. There will be recessed windows and angled walls, creating some additional terraces for some of the units.

Hartranft will likely continue to see such development over time.  Ludlow has already seen so much development that the number of vacant lots, once enough to render many blocks in Ludlow almost entirely vacant, are dwindling away.  The North Philadelphia Choice has rebuilt the Norris Apartments, with Phase V about to be built west of the Temple regional rail station. West of Temple, very few vacant lots or buildings remain and Broad Street is booming with new development, even high rise buildings.  New apartments and retail are necessary to encourage revitalization in Hartranft and complement the efforts of the Village of Arts and Humanities and Temple University.