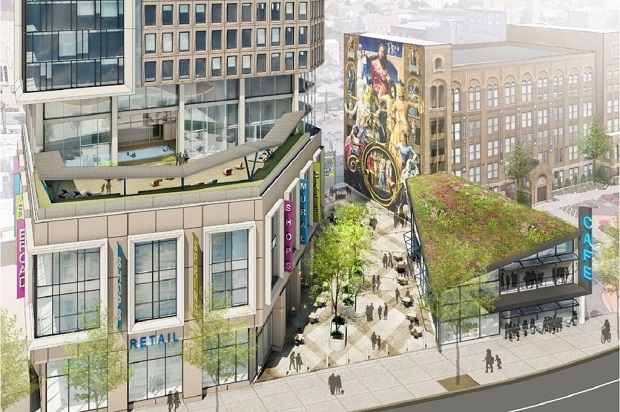 North Broad Street is seeing a huge amount of new development which includes housing, entertainment, retail, and institutional development.  Despite the new development, there are still several underdeveloped sites, some of which are being used for parking lots. One of the most noteworthy sites is at the busy intersection of Broad and Spring Garden Streets, next to the famous “Common Threads” mural, designed by artist Meg Saligman, on the side of the Mural Lofts apartment building.  That mural was painted twenty years ago on the west side of that building, which is the former Thaddeus Stevens School and was being used as a school district office building at the time. Development firm EBRM, owned by developer Eric Blumenfeld, owns the parking lot on the northeast corner of Broad and Spring Garden and the Mural Lofts building.  His firm is planning to redevelop the parking lot with a tall luxury apartment tower that would preserve views of the landmark mural. This new tower project will even celebrate the mural and be called Mural West. It is intended by the developers to be a “statement building” for North Philadelphia and Center City. Mural West is designed by AOS Architects.

Mural West will be 30 stories and 363 feet tall. It will have 246 luxury rental units.  The apartments will be studios, one-bedroom, and two-bedroom units. The lower five floors will have retail space and commercial space, including an outdoor pool and deck on the fourth floor.  A small two-story retail building will be located on Spring Garden Street. It will house a large cafe or restaurant, similar to a building at Second and Walnut Streets, and will have a slanted green roof.  In between the tower and the smaller cafe building will be a public plaza known as “Common Ground”, which is intended to be a gathering place and focal point for the neighborhood. Common Ground will have landscaping, benches and lighting, but will also have an entertainment area with an outdoor TV screen and seating.  The Common Threads mural will remain and rise over the plaza and views of the mural will be preserved from many angles. The exterior will have pre-cast “punch” window frames and glass curtain wall windows. There will be 24 on-site parking spaces and 47 off-site parking spaces. One of the most interesting features will be a wraparound replica of the Common Threads mural on the crown of the building at the very top.

North Broad Street and North Philadelphia are coming a long way with all this new development.  A new apartment tower at the busy, but underdeveloped, intersection of Broad and Spring Garden Streets extends Center City further north in some ways.  It will create a new neighborhood gathering space and provide new retail space on an underutilized site. Across the street, another highrise office and apartment development is planned for the northwestern corner of the intersection, new highrises are being built and planned to the north, and large new developments are happening to the south.  Development at Broad and Spring Garden will provide a new gateway to the rapidly developing North Philadelphia and North Broad Street.