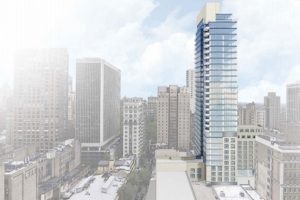 A new apartment tower is about to begin construction on the site of the former Boyd movie theatre at 19th & Chestnut Streets.  This new tower will be built where the large, ornate auditorium once stood.  The auditorium, where such movies like Philadelphia with Tom Hanks once premiered, was demolished by developers Pearl Properties after they bought the theatre from a developer who wanted to build a new movie theatre there.  Those developers won approval from the City Historical Commission to demolish the entire theatre after a long fight by preservationists and community members to save it.  The ornate lobby of the movie theatre will be preserved and used as a retail space on Chestnut Street.

The new tower is being designed by Cecil Baker Architects, which was hired on behalf of Pearl Properties by a community group which wasn’t happy with the original design.  It will be 32 stories and will have 250 rental apartment units and retail spaces on 19th Street and Sansom Street, in addition to the retail space in the former Boyd Theatre lobby.  There will, also, be retail at the corner of 19th and Chestnut in an attached project being built by Pearl Properties, which will have a Target store and will preserve the historic Alexander Building on the corner.  The tower will be clad in glass panels and it will be oriented lengthwise from north to south.  The project will have amenities for the residents, including a second floor terrace, a fitness center, a yoga room, a guest suite, and a lounge.  All parking will be underground and accessible on 20th Street.

This project was approved by the City Planning Commission’s Civic Design Review committee on November 24.  Since the project conforms to zoning requirements, it does not need a variance by the city’s Zoning Board.  That means the new construction can proceed as soon as the developers have completed the demolition, which is almost done.