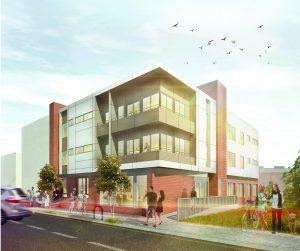 The Ludlow neighborhood, in North Philadelphia, is a long overlooked neighborhood which had once been very blighted.  The neighborhood runs between South Kensington and Yorktown, north of Girard Avenue.  It has been experiencing much redevelopment by community groups, like Asociacion de Puertorriquenos en Marcha, and the Philadelphia Housing Authority in recent years.  Much of the new affordable housing is meant for lower middle-class families.  Recently, private developers have been building small new apartment buildings and townhouses in Ludlow, especially on the blocks just north of Girard Avenue.  A new mixed-use building is planned to replace a long vacant lot and a long vacant building on the 1200 block of North Seventh Street.  This new building represents the growing popularity of the neighborhood in several ways.

The new mixed-use building, officially at 1225 North Seventh Street, is being both developed and designed by prolific North Philadelphia firm Harman Deutsch Architecture.  Harman Deutsch wants to use part of the building as their office and headquarters, but also have several apartments.  The building will be three stories and 38 feet tall.  The first floor and basement will have the offices and design studio for Harman Deutsch and some of the apartments and the second and third floors will have the rest of the apartments.  In all, there will be fifteen rental units.  Most will be one-bedroom units, but there will be three two-bedroom units.  The second and third floors will have wraparound balconies overlooking the street and the entrance to Harman Deutsch.  The rest of the exterior will have metal panels painted gray and white, as well as, red brick, mostly on the first level.  The building at 1225 North Seventh Street recently received zoning variances for the amount of units and for having some residential units on the first floor.

The 1200 block of North Seventh Street has been seeing much new private development, along with the surrounding blocks along North Seventh, North Franklin, and North Eighth Streets.  Ludlow is becoming a popular residential neighborhood again and having the offices and design studio of lower North Philadelphia’s most popular architecture firm is a real sign of Ludlow having arrived as a part of the area’s creative renaissance.