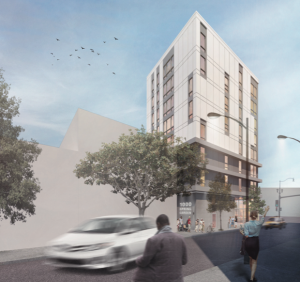 The Callowhill neighborhood is north of Chinatown and until recently was a largely vacant former industrial area.  Over the years, several industrial buildings were renovated into apartments or office space and the former Reading Viaduct is currently being converted into an elevated park.  Spring Garden Street runs between the Callowhill and the Poplar neighborhoods. For years, it suffered from vacancy and blight and had few pedestrians along an old shopping district.  Spring Garden Street is beginning to see new development and has seen new businesses open up. A new apartment highrise at 10th and Spring Garden is planned and will be the first of its kind on that stretch of Spring Garden Street.

This new building is being developed by KT Investments and designed by neighborhood architects Harman Deutsch.  It is being built on two lots, one at 518 N. 10th Street and another at 1002 Spring Garden Street, next to the building that has the Union Transfer concert hall.  It will be eight stories tall and will have 21 rental units; two of them will be affordable. The first floor and basement will have a 2,900 square foot retail space, adding to the commercial corridor on Spring Garden.  The mix of apartments will be seven studios and fourteen two-bedrooms, unusually it will not have any one-bedroom units. The exterior will have gray panels on the second and third levels and white panels on the upper levels.  There will be scattered windows on the upper floors. The roof will have a deck with great views of Center City. The building will be called “1000 Spring Garden”.

1000 Spring Garden will help activate the burgeoning Spring Garden commercial corridor and could be the beginning of a building boom in Callowhill and Poplar.  The development of the Reading Viaduct and developments on North Broad are making these neighborhoods even more popular than they were and it is possible that developers will want to build more highrises throughout these neighborhoods.

Interested in finding out more about the area and building? Contact The Condo Shop for more information. 215.692.6636 | info@thecondoshops.com