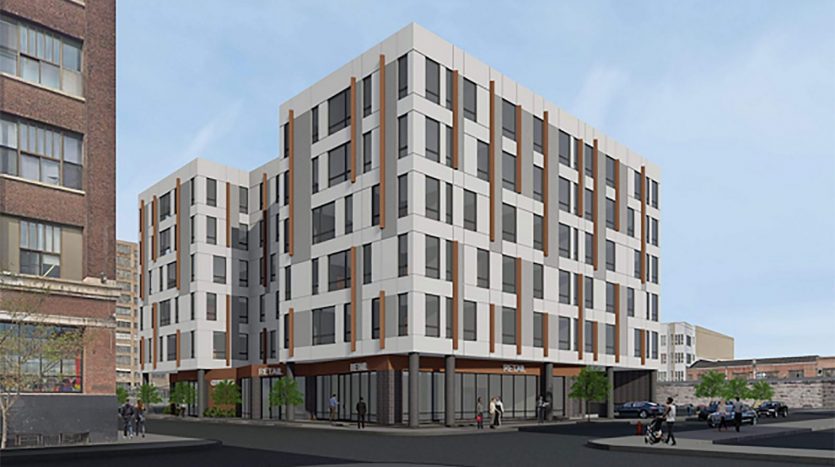 The Callowhill neighborhood is a formerly industrial zone just north of Chinatown in Center City.  It used to be an entirely industrial area built around the former Reading Railroad Viaduct that used to feed into the former Reading Terminal.  In recent years, a part of the former Reading Viaduct was renovated into the Rail Park, a quarter mile long stretch of a curvilinear park, which has a trail, benches, and landscaping.  Even before the Rail Park opened recently, some older industrial buildings have been renovated into apartments and condominiums. The Callowhill neighborhood is starting to see new construction on vacant lots and parking lots, as well.  One large parking lot that is about to be replaced with new development is at the corner of 12th and Callowhill Streets, next to the Rail Park. This new development will be a co-living apartment building, built by Quarters by Medici. Co-living is a new trend in apartment living, in which tenants share kitchens with tenants of other apartments.  New co-living apartment buildings are being built in Northern Liberties and Kensington. The one next to the Rail Park will be called, “Quarters at 1201 Callowhill” and is being designed by JKRP Architects.

The Callowhill neighborhood has a lot of potential in coming years.  It has close proximity to much of what Center City has to offer, including shopping on Market East, Chinatown, the Parkway museums, access to transportation, and major office buildings.  The Rail Park provides the neighborhood with a great new public space and redevelopment is occurring rapidly along North Broad Street. Callowhill still has vacant sites and parking lots that would be prime sites for new development.  Recently, a new high-rise has been built at 10th and Vine Streets and the Heid Building, on 13th Street, is being renovated into apartments. Callowhill has a bright future and Quarters at 1201 Callowhill is a big part of that, bringing many new young residents and a large new retail space, all in the middle of the neighborhood and next to the Rail Park.

13 Zoom Video Chat Tips, Tricks and Hidden Features
Things to Do When You’re Stuck at Home: Take a Virtual Vacation

The data relating to real estate for sale on this website appears in part through the BRIGHT Internet Data Exchange program, a voluntary cooperative exchange of property listing data between licensed real estate brokerage firms in which The Condo Shop participates, and is provided by BRIGHT through a licensing agreement. The information provided by this website is for the personal, non-commercial use of consumers and may not be used for any purpose other than to identify prospective properties consumers may be interested in purchasing. Real estate listings held by brokerage firms other than The Condo Shop are marked with the IDX icon and detailed information about each listing includes the name of the listing broker.
2020 BRIGHT, All Rights Reserved. Information Deemed Reliable But Not Guaranteed. Some properties which appear for sale on this website may no longer be available because they are under contract, have Closed or are no longer being offered for sale.
Data last updated: 5/24/20 9:21 PM PDT